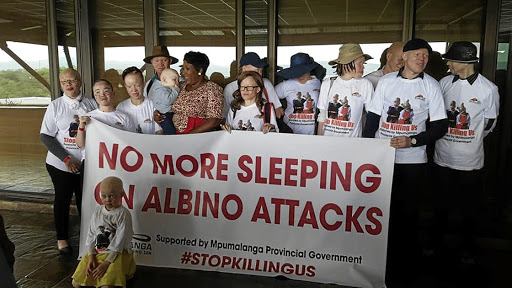 Persons with albinism in South Africa continue to experience high levels of abuse and violation of their rights, due to entrenched harmful attitudes and beliefs associated with albinism.

Over the past three months, we have heard of several incidences of kidnapping and killing of people with albinism.

Some of these incidents have been reported in the media, while others go unreported.

The killing of people with albinism is a big issue in African countries such as Malawi and Tanzania in East Africa, so much so that strong interventions have been introduced and implemented by their governments to combat the killings.

There is no denying that there has been an increase in these atrocities in our own country.

However, the question is: how do we deal with this scourge?

The three men accused of the kidnapping and murder of a 13-year-old girl with albinism have been denied bail.
News
4 years ago

We need a strong police force and judicial system that dedicate their resources to identifying the perpetrators and ensuring that justice is served on the culprits.

These abductions and killings can no longer continue unabated if we have a constitution that protects the human rights of each and every citizen.

Persons with albinism should enjoy the same rights under the constitution as other South Africans and receive equal protection against unfair discrimination, killings and hate speech.

Fallacious beliefs and myths, heavily influenced by so-called traditional healers and greedy and unscrupulous individuals, continue to threaten the lives and physical integrity of people with albinism.

Just as a reminder, on June 13 2013 the United Nations Human Rights Council adopted the resolution on albinism to condemn attacks and discrimination against people with albinism.

The United Nations resolution indicates that this is not an isolated issue in one country, and therefore each country must take steps to remedy the situation.

The following year, the General Assembly of the United Nations proclaimed and adopted June 13 of every year as "International Albinism Awareness Day".

According to the declaration and adoption of this day, member states (which include South Africa) are to provide the United Nations High Commissioner for Human Rights with information on the initiatives taken to promote and protect the human rights of persons with albinism.

This includes efforts to increase awareness of the human rights situation of persons with albinism and understanding of albinism.

Wadula is a human rights activist for people with albinism, and former chairman of the albinism society of South Africa.