VAT increases are leaving some giddy and some feeling the heat 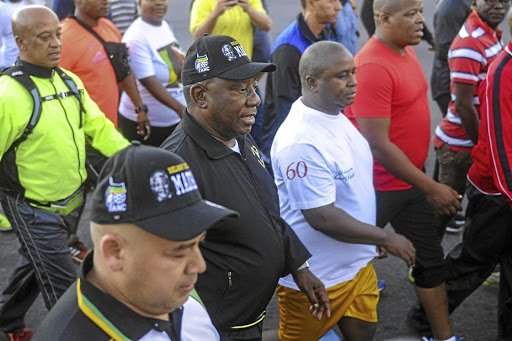 President Cyril Ramaphosa is joined by citizens during a 5km walk from the Gugulethu Sports Centre to Athlone. The writer says with VAT and petrol increases, we might as well stop hopping into our cars and start walking everywhere.
Image: Jaco Marai / Gallo Images

The text messages have been coming in thick and fast.

"Dear Valued Customer, due to the VAT change and a price increase your call rate changes to R1.23/min." That message came from my cellular network provider.

The home insurance notification seemed almost giddy and typical of the insurance industry - they never use the word "increase" when they are about to fleece a client. They resort to calling their increase a "re-rate", although the effect is the same. My bank has also been kind enough to remind me that they will, through no fault of their own, charge me a little more for allowing me to keep shekels with them.

However, I am the bearer of good news today. It was all a hoax, people. The VAT increase announced in the February budget and set to kick in today, on April Fools' Day, was only a prank.

How the custom of pranking on April 1 came about is shrouded in mystery, but it has become tradition to pull jokes on those near and dear to us.

Following the elevation of Cyril Ramaphosa as president in February, the euphoria was tempered by the announcement of a value-added tax (VAT) increase a week later.

A bleak Easter awaits taxpayers, who are being punished with a VAT increase because the government fell short of R50-billion in tax collections. The VAT increase is also meant to plug the big whole dug by former president Jacob Zuma, who left President Ramaphosa with a free tertiary education promise when the kitty was almost running empty.

Teasing the mentally handicapped must be among the most insensitive of human pursuits. I also plead guilty to deriving morbid pleasure from teasing ...
Lifestyle
4 years ago

I can almost hear him guffawing with laughter as someone mops up the mess he left behind.

Even the minister who increased VAT in February, Malusi Gigaba, has left for the home affairs ministry - hopefully not to naturalise any more foreigners whose misdeeds are partly to blame for the hole in the Treasury.

The other matter that convinced the Straight & Two Beers crew that the VAT increase was a hoax was the suspension of SARS boss Tom Moyane last week. How do you collect taxes when the taxman has been put to pasture?

The fuel price is also set to surge and a drinking buddy said it made sense why Ramaphosa has been leading the masses on walkathons around the country: to get the masses fit and used to marching to their destinations as the costs of travelling become unaffordable. If you are still unsure whether you should pay a percentage more in VAT, you are welcome to call the Presidency for confirmation.

Straight & Two Beers will not take any responsibility for the misunderstandings.

As Benjamin Franklin said in 1789: "There are two certainties in life - death and taxes".

I met with Jabulani last week. He goes by the name JB these days. The last time I saw him more than two decades ago he was so fat, but now he's lean ...
Lifestyle
4 years ago
Next Article