Unpacking Zuma's nine-year rule and ethos that guided it 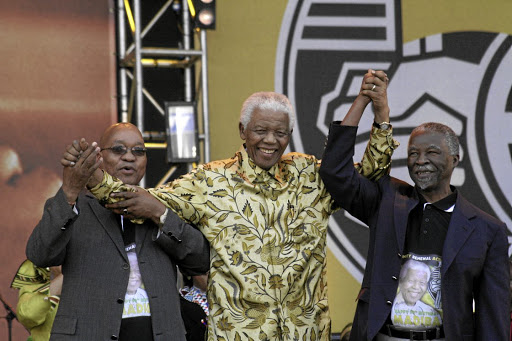 At Nelson Mandela's 90th birthday celebrations at Loftus, he is flanked by Thabo Mbeki and Jacob Zuma. The three very different personalities were each governed by a different ethos, the writer argues.
Image: Vathiswa Ruselo

The flood of obituaries to the Zuma presidency are likely to stream in for some time to come. But how should the nine-year period of President Jacob Zuma's rule be understood in its historical and theoretical contexts?

We can answer the question by applying a theoretical lens that distinguishes between state, government and ruling party as three dimensions of politics. The state is the overall machinery of power comprising different institutions and practices. It tends to persist even when parties, politicians and cabinets shift. Government is a formal structure of ministries and policies that may change every few years. The ruling party is an actor that plays a role in running the government, depending on circumstances.

The balance between the three dimensions is not fixed. Together they form what is often called "the regime".

The post-apartheid era has seen three terms of rule, dominated by the same party, the ANC. For most of the period it was led by three very different personalities - Nelson Mandela, Thabo Mbeki and Jacob Zuma. Each was governed by a different ethos: reconciliation and nation building under Mandela, and building a technically capable state under Mbeki.

Zuma will have his day in court - report

Jacob Zuma will have his day in court.
News
4 years ago

So what was Zuma's ethos, and how does the period of his rule compare to his predecessors'?

The primary challenge for the Mandela government was to merge different political institutions and traditions into a coherent whole while maintaining social and political stability.

The ethos of reconciliation dominated. This required a reformist approach - keeping the old style of management while gradually changing personnel and policies. An orderly but gradual shift of power was needed to ensure that the volatile environment did not get in the way of a new political order being built.

With the transition to the Mbeki period, changes in state, government and party became evident. The primary challenge shifted from ensuring stability to enhancing modernity; from racial reconciliation to technical proficiency; from creating a unified state to making it efficient.

President Cyril Ramaphosa on Tuesday hosted a farewell cocktail function in honour of his predecessor‚ Jacob Zuma.
News
4 years ago

The new imperatives were centralising planning and designing and implementing policies. The idea of the "African Renaissance" served as a unifying ethos.

The biggest problem of the Mbeki period was that its attempts at centralisation excluded voices from the margins of politics and non-state actors. In turn, this undermined the quest for policy effectiveness.

Zuma's appeal was due precisely to his being so unlike his illustrious predecessors. Not known for grand policy visions, he was expected to be pragmatic, seeking practical solutions instead of ideological purity.

His lack of commitment to specific policies meant that he was supported by opposing factions that thought him malleable. In short, he was a man for - almost - all people.

Even his ethical transgressions weren't seen as obstacles. They made him more human instead.

And human, all too human, he proved to be. Dispensing with the need to offer grand visions for the state, or claim competence in government, or manage the party with impartiality, Zuma used power to advance a single goal: self enrichment. The ethos was clear: grab as much and as fast as you can.

ANC leader Nkosazana Dlamini-Zuma has denied reports that she wants to resign from parliament as an MP.
News
4 years ago

The strategy he adopted was to mix and match individuals and structures to serve his one goal.

Corruption on a large scale preceded Zuma. He opened the gates for political entrepreneurs to enrich themselves by creating looting opportunities.

The impunity that guided his actions permeated all state institutions. But there was resistance within the state. The court system remained largely intact and, in many cases, fought back, as did the public protector. Large sections of the media, NGOs, the political opposition and principled individuals all played a role.

Eventually the tide turned, heralding a new transition of power in the ANC.

So, what lessons can we draw from this period?

One key takeaway is that free media and civil society voices, independent courts and accountability mechanisms, and honest politicians are all necessary.

- Greenstein is associate professor of sociology at the University of the Witwatersrand.