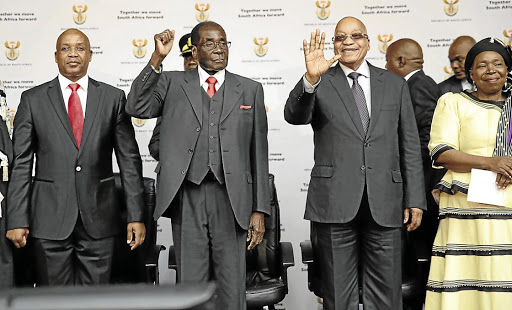 President Robert Mugabe's endgame in Zimbabwe holds various lessons for his South African counterpart, Jacob Zuma, as the latter, too, considers his prospects towards the end of his presidency. The first, obviously, is that while a country's president may feel the monarch of all he surveys, it is always possible that the blade of the guillotine is just around the corner.

Accordingly, it is always prudent to keep at least two bags packed for a hasty exit: one full of suits, shirts, underwear and socks, another full of foreign currency (preferably dollars or euros). You just never know how things might pan out, so it is best to be prepared.

Following the almost-coup, Mugabe has been in a stronger position than many African dictators before him because the African Union has in recent years become a lover of democracy and a hater of coups. It therefore now demands that changes of leadership must have at least a veneer of constitutionality.

This has always been the Zimbabwean military's weak point during this past week of flirting with political power. Hence its insistence that, despite its takeover of the airwaves, State House and parliament, alongside its house-arrest of the president and his family, its actions are not a coup.

In turn, this has provided Mugabe with a degree of wriggle room, which he has sought to exploit to the full.

Zuma will feel confident that whereas in Zimbabwe the army has long been deeply involved in the ruling party's internal affairs and the wider political arena, the South African National Defence Force is not an explicit political actor. He stands in no fear of a military coup (or even a Zimbabwe-style non-coup).

Yet he does have to worry about what happens within his political party, the ANC.

Even if his favoured candidate, Nkosazana Dlamini-Zuma, were to win the party leadership at next month's ANCelective conference, Zuma's continuing as president might be seen as a political embarrassment.

If strong contender Cyril Ramaphosa wins, even more urgent calls will be made within the ANC for him to be "recalled" because he will be viewed as an electoral liability.

It is a fair bet that, whoever wins, an excuse will be made for a delegation from the party leadership to visit the president and to ask him to stand down. Just ask former president Thabo Mbeki, who was fired by the governing party.

If Zuma refuses to co-operate, the ANC might turn to parliament where enough ANC MPs might feel emboldened to vote with the opposition to dethrone him.

Like Mugabe, Zuma will be battling for a dignified exit. Even more urgently, he will be fighting for survival. In previous years, Mugabe may have feared the prospect of retribution for his sins, and would have been determined to secure immunity from prosecution. Now, at 93, he is confident that once out of office he will be left in peace. He may or may not appreciate the irony that, unlike his country's last white ruler, Ian Smith, he will not be able to stay in Zimbabwe after he has been forced to stand down.

Zuma is differently placed. If he loses the presidency he stands in all sorts of dangers, not least of which is prosecution for past financial crimes and the prospect of his ending his days in prison. In other words, he has much more to bargain for, and he will be doing so from a weaker position.

Zuma's major strength is that, whoever wins the party leadership, the ANC will probably want to grant him immunity and get him out of the way, as otherwise they face the prospect of their former leader facing a corruption trial during the lead up to elections in 2019.

In short, Zuma will realise that it will make sense to hot-foot it out of the country, preferably to a comfortably authoritarian country that will turn down requests for extradition. - theconversation.com