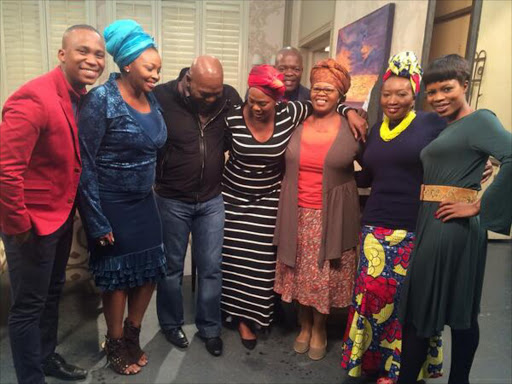 We live in a country that is notorious for artists living and dying in a state of poverty, tragically,  never managing to earn what is their due, despite being associated with a number of successful projects.

By now, you would have heard that we, the principal cast of Generations, have made a decision to embark on a strike, and walk off the set of Generations.

First of all, we want to apologise for the inconvenience that this may cause you, as our loyal viewers and fans. Please believe that it is not a decision we came to lightly. However, in light of the SABC and the MMSV Productions continued refusal to engage with us, and our grievances, we felt that reviving the strike was the only course of action available to us.

We wanted to take this opportunity to explain to you exactly what led to this drastic action, and give a full context of the events to date.  It is also important for us to state that before we went on strike, we made a point of communicating our unhappiness to MMSV Productions, to no avail.

We live in a country that is notorious for artists living and dying in a state of poverty, tragically,  never managing to earn what is their due, despite being associated with a number of successful projects.  We have made a decision, as dedicated professionals working on South Africa’s most successful TV show, that we will not be part of this painful statistic.  There is no reason, whatsoever, that we should live as ‘struggling actors’ when our show generates an incredible income for the production house and broadcaster.

There are a number of issues that led us to the strike - however, the main ones are:

We have tried repeatedly, to accommodate the SABC and MMSV Productions – whenever they requested an extension to examine the issues, we agreed. When, in November 2013 they asked us to end our original strike while they reviewed our demands, we agreed.

They committed to reverting to us with their responses to our demands – instead, they have issued us with threats to dismiss us if we don’t return to work. We regard this as a breach of trust, and working in completely bad faith with us.

We also consider their insistence on not paying us our fair due as a disturbing flouting of fundamental labour practices, and a perversion of the South Africa we are trying to build – a South Africa where labour is compensated fairly and appropriately.  The cast remains open to negotiating and working out a solution, and hopes that the broadcaster and production house respond to this sentiment.

We thank you for your patience with us, and hope you understand our difficulty and stand with us in this troubling time.

With love, and respect: