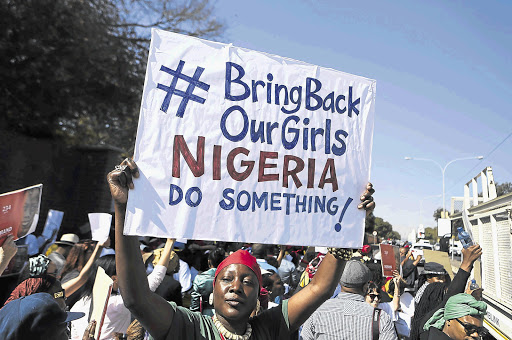 OUTRAGE: People march to the Nigerian consulate in Illovo, Joburg, to hand over a memorandum in support of the Bring Back Our Girls campaign to rescue more than 200 girls kidnapped by Boko Haram in Nigeria. Picture: Lauren Mulligan

Rape is a popular weapon during conflict.

No political ideal is worth raping a 12-year-old girl for.

As Africans and as humans we should lend our collective voice to the Bring Back Our Girls campaign, and say enough is enough.

It's been 41 days since more than 200 teenage girls were kidnapped. They are believed to be held hostage in the forests of Kaduna by the Islamist militant group known as Boko Haram.

Kaduna, part of Nigeria's "Middle Belt", has long been a hot spot of political violence.

In 2011, thousands of people were killed in post-election violence.

Kaduna is where the Christian south meets the Muslim north, and the two have never found common ground for coexistence.

Boko Haram has killed thousands of civilians, including children as young as eight, in the northeast.

The kidnapping of the girls is believed to be part of a troubling war trend where rape is seen as the most effective weapon.

Who can forget Bosnia and Herzegovina where more than 20000 Muslim girls and women were singled out for rape, imprisonment, torture and execution, in that region's ethnic cleansing war?

Rape has also been used as a weapon in conflicts in Rwanda, Somalia, Liberia, Uganda, Cyprus, Croatia, Bangladesh, Haiti and Cambodia.

Psychologists around the world have identified systematic rape as a popular weapon of war.

In World War II, women were abducted and made sex slaves for occupying forces.

According to the Global Justice Centre, rape is the most powerful and cost-effective way to destroy the lives of the "enemy", and is being used more than any other prohibited weapon of war, including starvation and the use of herbicides, biological or chemical weapons, dumdum bullets, white phosphorus or blinding lasers.

"If there is one set of fundamental functions of rape, civilian or martial, it is to display, communicate, and produce or maintain dominance, which is both enjoyed for its own sake and used for such ulterior ends as exploitation, expulsion, dispersion, and murder," Claudia Card wrote in an essay in a special edition of the feminist journal Hypatia on women and violence in November 1996.

"Acts of forcible rape, like other instances of torture, communicate dominance by removing our control over what enters or impinges on our bodies. Rape is a cross-cultural language of male domination (that is, domination by males; it can also be domination of males). This is its symbolic social meaning."

The other side of genocide

She says there is more than one way to commit genocide.

One way is mass murder.

Another is to destroy a group's identity by decimating cultural and social bonds.

"Martial rape does both. Many women and girls are killed when rapists are finished with them. If survivors become pregnant or are known to be rape survivors, cultural, political, and national unity may be thrown into chaos."

She says these have been among the apparently intended purposes of the mass rapes of women in Bosnia-Herzegovina and in Rwanda, of Vietnamese women by American soldiers, of Bengali women by Pakistani soldiers in 1971, and of Native American women by British soldiers.

Reuters reports that a women's group says the military in Myanmar (Burma) is still using rape as a weapon of war, with more than 100 women and girls raped by the army since a 2010 election.

According to international law, using rape as a weapon of war is a war crime, but who will prosecute the rebel groups and rogue governments still committing these heinous acts?

The Democratic Republic of Congo has been called the rape capital of the world.

The UN and the AU have signed an agreement on the prevention of and response to conflict-related sexual violence in Africa. The problem with agreements is that they demonstrate good intentions, but rarely translate into action.

We need a global task force that will hunt and exterminate this scourge.

If war rapes have been going on since World War II, we should have found a solution or deterrent by now - that is, if the global political will to do so is genuine.