Another Bric in SA's road to prosperity 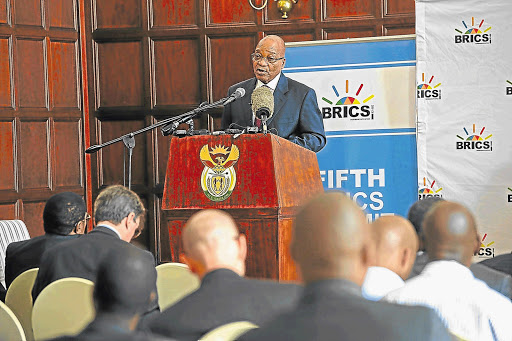 SERIOUS: President Jacob Zuma briefs the media in Pretoria in March this year, ahead of the 5th Brics Summit. Our involvement in Brics gives South Africa a competitive advantage, says the writer. Picture: Siya Duda

Our membership of Brics is pivotal to economic growth, writes Happy Ntshingila

This is poised to raise the debate about South Africa's competitiveness and gives us another opportunity to reflect on our role in the Brics group of nations (alongside Brazil, Russia, India and China) and how this has placed South Africa in the company of the world's fastest-growing and increasingly influential nations - a key ingredient for competitiveness.

The involvement in Brics presents South Africa with a distinct competitive advantage and a unique selling point to position the country as the strategic investment destination of choice in the region.

The Brics formation is the model of future international relations for partners on an equal footing.

Leveraging our membership will benefit our economy  and promote healthy international relations between South Africa and fellow Brics members.

Three objectives guide our membership of Brics: boosting job creation and the domestic economy; supporting infrastructure development and industrialisation for the realisation of the African Renaissance; and partnering with key players on issues of global governance.

We also contribute to making the establishment of the Brics Development Bank a reality.

Foreign direct investment from Brics countries is projected to increase to more than $150-billion by 2015, from $60-billion in 2009.

How can South Africa enhance its competitiveness in the global marketplace?

The answer lies in leveraging its gateway role in Africa. South Africa is a leading foreign direct investment destination on the continent, attracting investors looking to set up their African headquarters. Brics has nourished Africa's economic emergence and elevated the continent's global relevance.

The recession and recovery period have enhanced this shift.

Our unique position as a member of the Brics grouping of nations presents South Africa with an opportunity to leverage its intrinsic understanding of doing business successfully in Africa with its fellow Brics members.

The country can leverage this established presence to support and participate in Brics institutions to identify opportunities for South African companies to form mutually beneficial partnerships.

Another advantage is the country's natural mineral wealth, estimated at $2.5-trillion.

South Africa is the world's largest producer of platinum, chrome, vanadium and manganese, and the third-largest gold miner.

It also offers highly sophisticated mining-related services and expertise, and so contributes significantly to the Brics resource pool.

Leveraging our areas of expertise to enhance our global competitiveness, South Africa is an established source of sophisticated financial services.

The competitiveness forum, hosted by Brand South Africa, will, among other things, dissect the meaning of the recently published 2013/14 World Economic Fund Global Competitive Index, which saw South Africa improve or hold its position in the rankings in seven of the 12 pillars of competitiveness.

Finally, it is important that our demonstrated ability to host major sports events, such as the soccer, rugby and cricket world cups, be highlighted.

Our ability to host these capital-intensive undertakings, including raising international sponsorships and ensuring quality broadcasts to billions around the word, underlines our ability to compete and have huge international appeal.