Victory for labour must not mean defeat for SA 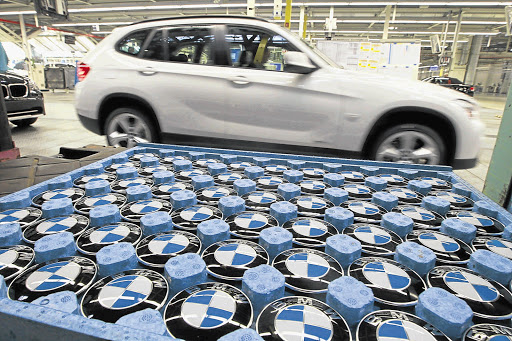 When workers in the car assembly and auto component sector went on a four-week strike not long ago, demanding higher pay, it was to prove to be one of the costliest labour actions in recent times - in more ways than one.

Most affected by the strike was BMW, which was forced to halt output at its only plant in South Africa.

The result? By the time car assembly and auto component employees agreed on October 6 to accept a 10% wage increase for next year, BMW had lost 13000 cars in production and had missed supply targets on several export contracts. Most crucially, the events forced the manufacturer to stop expanding in South Africa.

The German manufacturer announced that, as a result of the strike, South Africa had been removed from consideration as a site for the production of a new BMW model.

Yes, the cessation of the strike marked a victory for the workers who stared down the automobile behemoth. But the strike had many other ramifications, not only for BMW, but also for the industry and, more important, for the economy.

The strike at factories owned by seven carmakers, including Toyota and Volkswagen, cost the industry at least R20-billion in revenue, according to the National Association of Automobile Manufacturers of South Africa.

The damage to the economy might be even more severe - foreign investors have threatened to scale back expansion plans as labour instability worsens.

In fact, in the wake of the strike, the Renault-Nissan alliance was steaming ahead with plans to launch vehicle assembly plants in Nigeria. This would indicate that the manufacturers have been thinking about other options because of inflexible or intransigent trade unions in South Africa.

Strikes this year have crippled output in industries such as mining, construction and aviation, undermining economic expansion and job creation in a nation in which one in four people are unemployed.

The disruptions might cut this year's growth rate by half a percentage point, according to Peter Worthington, an economist at Absa's corporate and investment banking unit, as quoted by Bloomberg.

The Reserve Bank has already lowered its forecast for gross domestic product growth to 2%, which would be the slowest pace since the 2009 recession.

Our country relies on capital inflows from abroad to help finance its current account deficit, which reached 6.5% of GDP in the second quarter of this year.

Most of that foreign capital has come from investment in stocks and bonds, the flow of which can be volatile as global sentiment fluctuates.

Last year we attracted $4.6-billion in foreign direct investment, or 1.2% of GDP, according to data from the Organisation for Economic Co-operation and Development.

But labour and social issues are beginning to make investors more cautious.

The Marikana massacre in August last year did us no favours, with ratings agencies Moody's, Standard & Poor's and Fitch downgrading South Africa's debt rating for the first time since the end of apartheid in 1994.

The rand has plunged 15% against the dollar this year, the worst performer of 16 major currencies tracked by Bloomberg.

Anglo American Platinum said early this year that it would cut as many as 14000 jobs as part of a restructuring plan. It scaled back those plans after pressure from labour unions and the government.

A two-week strike by the biggest union at its South African operations, which ended on October 10, cost the company at least R1-billion in lost revenue.

Rising wage costs are adding to inflation and threatening to curb investment plans.

Construction workers won pay increases of as much as 12% after a three-week strike in August and September that cost employers an estimated R2.7-billion in lost revenue, according to the South African Federation of Civil Engineering Contractors.

It is good that we have sound labour legislation that protects workers from exploitation.

But employers argue that labour is becoming more expensive without a commensurate improvement in productivity.

Given this reality, employers are getting itchy feet and looking elsewhere for cheaper labour, which, as with Nissan's expansion into Nigeria, might begin to erode our status as a preferred destination for foreign investors.

If they can manufacture the goods in Nigeria for a cheaper salary bill, nothing will stop them from voting with their feet. This is a free world.

When BMW announced its intention to halt its expansion in South Africa, the deputy secretary-general of the National Union of Metalworkers of SA said this amounted "to political and economic blackmail".

But, in the hard world of finance, managing risk is a bigger concern than making a political statement. Though it is important to protect our workers, our unions shouldn't be so selfish as to push for short-term goals.

When companies such as BMW cut back on labour, or move elsewhere, that would translate into job losses, which will have a snowball effect on economic growth prospects.

Therefore, in their engagements with the employers, the trade unions should keep this in mind: they might celebrate the victories that they have just scored, but what do those victories translate to in the long term - for labour and for the economy as a whole?

Relations between labour and employers should accordingly be give-and-take.

Realistically, I believe we are in no position to call the shots - not just yet. We need to compromise, put our heads down and shoulder ahead.

And that means that labour needs a serious rethink if it is to remain relevant in this country's future growth.

In a throwaway line, he singled out competitive swimming as lagging behind in this regard.

One assumes that he means more black people need to be swimming competitively. A tall order.

I am not going to propound the stereotype that black people can't swim. To many black people in rural areas, swimming is a matter of life and death - some have to swim across rivers to get to work or school. But black people born in an urban area are disadvantaged because our townships do not have pools.

Yes, those children who go to multiracial schools in the suburbs will have access to the school pool, but by and large black people can't swim for the simple reason that there are no swimming facilities where they live. As a result, swimming doesn't feature in their mind as a sporting option.

When we say black people can't swim, it is not because they are genetically wired that way.