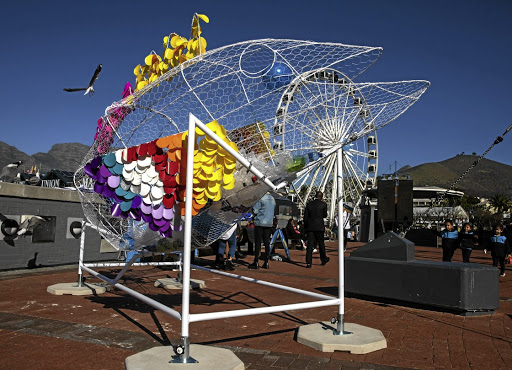 'A Fish Named Faithful' is collecting plastic at the V&A Waterfront in Cape Town as part of Plastic Free July.
Image: Dwayne Senior for Splash

The world is celebrating "Plastic Free July", but Mzansi still lags behind.

Rwanda has been plastic free since 2008. Their law prohibits using plastic, manufacturing it, importing it and selling it.

Businessmen in violation of these laws face up to a year in prison, and anyone caught carrying a plastic bag is fined.

Despite bags now costing 12 cents in SA - a law first introduced in 2003 - it has done little to reduce pollution.

The call to ban plastic has therefore become more urgent.

World Wide Fund SA reports that over 8-million tons of plastic waste is deposited into oceans every year.

It estimates that by the year 2050 there will be more plastic than fish in the ocean. Marine life becomes entangled in plastic and ingest it and die.

Mzansi is said to be the 11th worst offender in the world for plastics pollution, with India and Brazil ranked on top.

Beautiful murals out of blown hot plastic
Lifestyle
2 years ago

To highlight the dangers, "A Fish Named Faithful" was unveiled at the V&A Waterfront in Cape Town two weeks ago. Made from upcycled plastic and repurposed materials, the fish is 4.5-metres long and is 2.5-metres high.

It was commissioned by online eco-lifestyle and health retailer Faithful to Nature and designed by Our Workshop, a Langa-based nonprofit organisation. The public are invited to throw plastic waste into the fish's mouth.

"Every year, up to 12-million metric tons of plastic lands up in our oceans," says Faithful to Nature's CEO Katrien Grobler.

Our Workshop Project manager Richard Mandongwe said: "People do not pay attention to plastic's impact on our environment, but I hope through Faithful we are able to shed some light on where most plastic waste ends up and how to preserve nature."

The fish will be at the V&A Waterfront until Wednesday before moving to a new location to collect more plastic.

"All the waste collected will be disposed of in the most effective and responsible way possible - further driving awareness around the creation of pollution and more effective ways to dispose of it," says Grobler.