Global celebs in the making 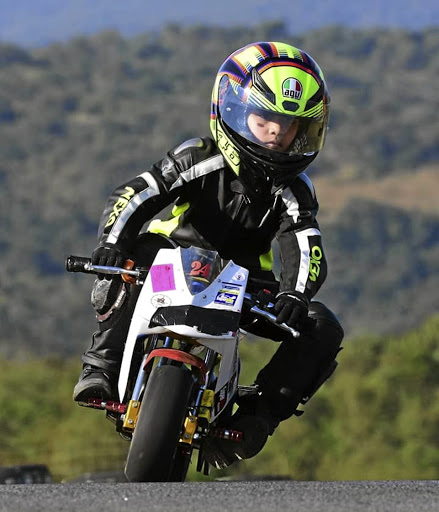 Seven-year-old Laila Williams has been burning tyres to the top of the biking order.

These li'l stars of Mzansi are proof that all is not doom and gloom in the country.

A biker, a dancer, a hitmaker and a fierce Tiger - these cuties bring smiles and pride to all with their exuberant talent.

Laila Williams is a seven-year-old biker taking on boys in big races.

"Laila has been a part of the pit crew for my brother who is a racer. She literally grew up on the right side of the tracks but learnt in a matter of two months to ride a motorcycle.

"Besides watching the races on TV, most of her skills on the bike are natural," says mom.

Williams, who is a single mother and paramedic by profession, says she doesn't know where Laila's bravery stems from, as she herself would never attempt even getting on a motorcycle.

"Laila is strong-headed, has answers for everything. She is always game for trying new things and knows exactly what she likes and dislikes."

She has completed two major competitions thus far, with five left for the year.

Having started at the back of the pack, she has worked her way up the logs to fifth overall in the championship and third place in the last iDube race that happened in KZN last month.

"I dedicated my trophy to my fans and family," says Laila.

Laila says besides biking, she's also a qualified first aider, having learnt CPR and life-saving skills from the age of two.

Following her success, her mom has now started a team, Lil' Rocket Racing.

"Avid biker kids will be trained by Laila's coach, Zaidy Boy, to be track ready for the various competitions every month," says Williams.

I had that birdie putt to be crowned champion after an intense 3 rounds of play offs. 5 birdies and I am the U.S kids golf Champion. Thank you for the support 🙏🏽 #SimTiger pic.twitter.com/sfxnWd0tdh

Little golfer Simthandile Tshabalala, pictured, is a rock star when it comes to knocking the ball out the park.

He was aptly coined SimTiger after professional golfers likened his skills to that of the legendary Tiger Woods. His father Bonginkosi Tshabalala says his son, who attends Steyn City College, was nicknamed by golf officials when he played in the World Golf Championship in Malaysia.

"They said he plays like Tiger Woods and when he told them his name they said they will call him SimTiger."

At seven years old, he has just won the US Kids Local Tour, which was played at Zwartkop Country Club last week. He has also played in Australia as well as Scotland this year.

He has won the Cape Town Open, Durban Open, Woodhill Open, and was in the top 5 of the Australian OpenHis father says he can only dream of having the golfing skills that little Sim has. "I am a social golfer. I am nowhere near where his level of golf is," says Tshabalala.

His dad started training him in various sporting disciplines since the age of two.

"From tennis, soccer, swimming to cricket. We started with golf when he was four years old. He started playing competitive golf only nine months ago.

"My aim was to find out what his talent was from an early age and then support him all the way," says the proud dad. Sim dreams of being the first black from SA to win the Masters.

Young stars are captivating the world
Next Article