Duo ready as competition intensifies on The Voice SA 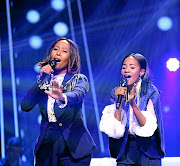 Glamorous Pretoria singing duo Aura have conquered the gruelling stages of The Voice SA and comfortably made it to the top 16.

The pair consisting of Mapula Mahlo, 24, and Fentshe Nkabinde, 20, are set to have a few more tricks up their sleeves with their harmonies as they move on to the next phase of the competition.

"Musically, we are looking forward to being explorative, fun and diverse and leave our hearts on the stage," said the pair.

The duo said they were ready for the "lights, camera and action" as the viewer participation phase kicks in.

Mahlo and Nkabinde, who are not related but have similar features musically and physically, met at a music showcase in Pretoria two years ago and have been inseparable since.

Nkabinde is a music theory student and Mahlo is a music teacher. Both have been singing since childhood, and Mahlo was once a backing vocalist for gospel hitmaker Dr Tumi.

A Facebook video the duo posted went viral garnering more than 100,000 views, and that is how Aura was born.

At a reveal of the new stage at the Mosaïek in Randburg, the pair told Sunday World magic was going to descend the stage during their performance.

"We never thought we would actually get this far. We just thought that we would be doing what we love and next thing we kept going on an on until the knockouts and battles and now we are here," said Mahlo.

Coached by Riky Rick, the pair said the rapper was genuine and encouraged them to do their best.

"All his pep talks are still in my head, every time I sleep at night, I think 'oh yeah, coach is like do this and [do] that'," said Mahlo.

"Because he is a hip-hop person, he has more of the stage presence, so he always coordinates us [on] how we should interact with the audience not just by voice but by actually moving around," Nkabinde said.

This week, the top 16 will perform live for celebrity coaches Lira, Riky Rick, Riana Nel and Francois van Coke, with Micasa as the guest performer.

A twist for the competition is the inclusion of a new international sound system that will be an experience for those in the theatre.

Aura is one of two paired talents announced as part of the live shows. Another duo is the PJ Twins, Peter and John (20) from Bonteheuwel, who are also a singing powerhouse.