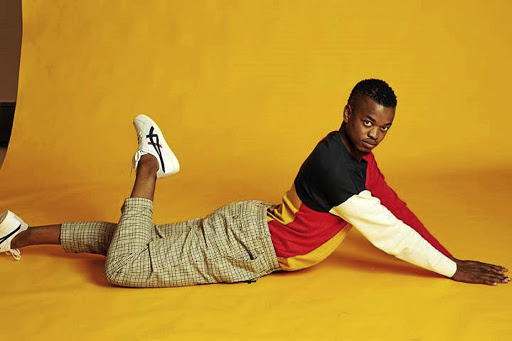 A tenacious Mpho Popps Modikoane has reached dizzy heights after only 10 years in the entertainment industry.

But he says the dream doesn't end here.

The comedian has a list of crazy but achievable goals lined up. As he looks forward to turning 32 on June 10, Mpho Popps is planning his annual national birthday tour.

This year the show is themed Black In My Day and kicks off at the Opera House in Port Elizabeth on June 7, before travelling to the rest of the country.

Joburg fans will see him on August 24 at the Gold Reef Lyric theatre.

"Every year I host a birthday comedy special because it allows me to have my friends, my family and my fans, [all] the people who support me under one roof."

He says he wants to take his fans on a nostalgic trip down memory lane, sharing how he grew up and all the experiences that have brought him to where he is today.

"It is a play on what life was like back in the day as a black man and navigating those challenges. It is reflective on life in the hood, and drawing a comparison to flourishing in the suburbs," says Mpho.

Family is happiness to the star who admits that he suffers from depression and comedy was his saving grace.

"If I wasn't a comedian I'd be a male model. I would be a contestant on Mr South Africa," he jokes.

But he says in a serious tone that comedy allowed him the platform to vent and deal with his depression.

Looking dapper in a suit, comedian Mpho Popps killed it as host, as always.
Shwashwi
3 years ago

"My belief is that my talent and skill are not a show I put on but an embodiment of my true self. This is who I am, all day, every day. My goal is to spread laughs and bring joy to audiences around the world. Making other people laugh has allowed me to heal."

He says the feelings of sadness and failure never disappear, but they are something you have to work at consistently. Now he wants to extend his gift of the gab, bringing joy to others by performing a lot more in Africa and the rest of the world.

He also hopes to take his talents into acting and open his own comedy club in SA.

"Acting is something I really want to pursue and [I see it as] the opportunity to do more challenging roles," he says.

He is already on his way after debuting on the hit drama Ayeye and starring in and executive producing the local film Thina Sobabili.

The film was selected to represent SA at the Oscars and the Golden Globes in 2015.

Mpho Popps, who was born in Soweto and grew up in Vosloorus, says when life handed him lemons he entered the So You Think You're Funny comedy talent competition in 2009. He was contagiously funny and came in second.

"I met comedy giants at the time who helped shape my career from that point on," he says proudly.

His hard work saw him earn a nomination in the first Annual Comics' Choice Awards as best newcomer in 2011. He went on to win the award for Best Breakthrough Act in 2012.

He has however, become known as the "MiWay guy" after doing a series of adverts for the insurance company.

Mpho Popps was the saving grace of the evening with his delightful comedy.
Shwashwi
3 years ago

"I get a lot of people who call me 'MiWay' to this day," he chuckles.

As a sought-after MC for SA's biggest events, he highlights the hosting of the Samas alongside Somizi Mhlongo and Dineo Ranaka in 2018 as his best hosting gig.

"It was a career highlight as it was the one awards show that I have always wanted to do."

He is also a hands-on dad and says despite his busy schedule, he does not make excuses but makes his relationship with his daughter work.

"It's not perfect, but my daughter is the most important person in my life, so I do my absolute best everyday to make sure that she is loved, well taken care of and that her future is secured."

To bring in even more moola, he hopes to launch a men's underwear line.