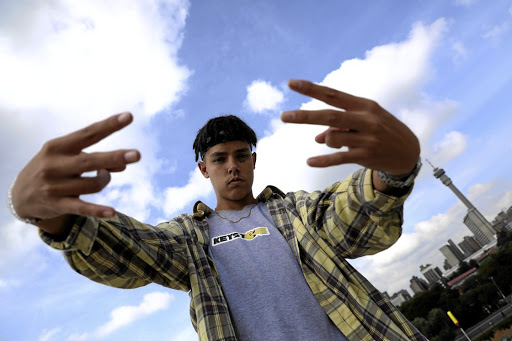 The 20-year-old mental illness advocate from Centurion, said he was currently working on a music project that will reflect on his life in a different light.

Like the late American rapper Xxxtentacion, J Molley likes questioning the darker side of life. He would rather talk about hell than heaven and in some of his songs, like Lighting, he keeps reminding people that they will one day die.

His other song Cold, talks about the cold heart of his girlfriend.

He released two EPs under his name called Dreams Money Can Buy and the latest being Leader of the Wave.

Feeling the pressure of life, he tattooed "$lave" under his left eye that compliments the "wake up" tattoo on his neck.

"The slave tattoo is surrounded by the idea that everyone is spending their whole lives consumed in a system; you're born, forced to go to school and then you go to university, you get married, you have kids and then you die. Then your kids follow the same system.

Sportscaster walks away with two gongs
News
3 years ago

"We are caught up in a system where all we do is to make money just to survive and not actually to be happy. So everyone is a slave to money. The dollar sign means money."

When he performs on stage, people hardly dance or scream but would rather give him a round of applause when he leaves.

"I will be releasing yet another work of art later this year that puts a past tense to my sad life and show people the happy side of me," said Mollett.

He said he will not totally veer away from his usual topics that look into depression and other social ills but will give his latest project a twist by featuring other artists such as the bright Sho Madjozi.

"I've been struggling with this thing (depression) for a long time but life looks better now and I feel human after so long. It is time to give reality a chance," he said.

He said he realised he was battling with depression and anxiety while in high school in 2016. The rapper said he never told his mother, who got divorced from his father when he was nine, about his mental state as she also had financial problems to deal with.

"I never went for therapy because we couldn't afford [it]. Fortunately, I never suffered from intense anxiety or depression. I was just more miserable than anything, just unsatisfied. There was a period where I felt like nothing existed," he said.

One of the reasons why J Mollet said he felt a dark cloud was hanging over his life was because he dropped out of school while in matric after his single and unemployed mother struggled to pay for his fees.

He started hanging around with his rapping trio friends who he joined as a singer.

"They wanted me to also rap. I knew I could but I told them I preferred singing and it all worked out with them.

"I released a song called Lest in 2016 as an indie artist and later that year left the group because I was becoming serious about my music career."

Barely a year in the industry, his following increased and in the following year he started paying for his mother's house after she struggled to keep up with the monthly bond payments.