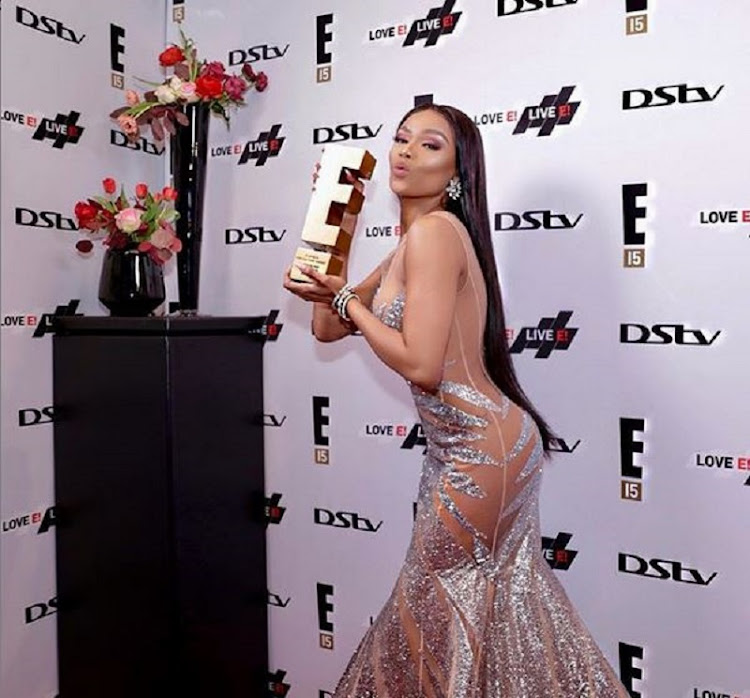 Bonang Matheba proved that she is Mzansi's favourite A-lister once again when she received top honours at the inaugural E! Africa Pop Culture Awards.

Held at Sandton Sun Hotel on Thursday night, celebrities including Nigerian muso D'banj and Nomzamo Mbatha were also among a crop of top entertainment personalities honoured.

Sporting a silver sequined dress, Matheba continued the great year she is having so far after recently launching BNG, a champagne line in collaboration with Woolworths last month.

"It's very overwhelming, that's the first emotion that went through my mind when I found out. It's an honour."

"It feels like a 'well done', an affirmation of 16 years of hard work that has come together so beautifully. I am having the best year of my life, it's perfect timing especially since I have been part of E! Africa's 15-year journey.

"It could have been anyone else, but I'm glad that they chose me," said Matheba.

Mbatha, rocking a Gert-Johan Coetzee gown with a feather top, was given the Philanthropy Icon Award for her humanitarian efforts.

Bonang said that in the airport slow lounge after the event they "sat together and just started talking".
Entertainment
3 years ago

"It always leaves me humbled when honoured for the humanitarian work that I do. To me it's a labour of love, that allows me to shine a light and do good for those who are society's marginalised."

"My role with the UN Refugee Agency as well as the various philanthropic endeavours has opened me up to a bigger world."

Noah was honoured with the TV Icon Award and DJ Black Coffee the Music Icon Award.

Tell Me Sweet Something and Vaya director Omotoso scooped the Film Icon Award.