Meas brings spirit of Van Wyk back to stunning life 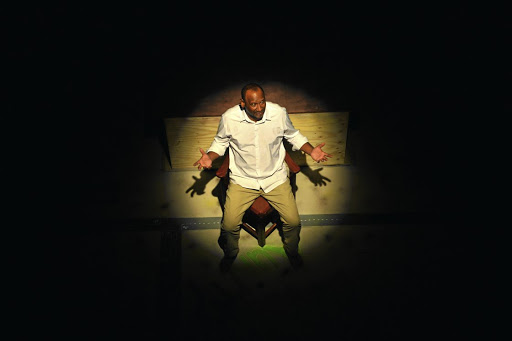 Actor Zane Meas in 'Van Wyk, the Storyteller of Riverlea'

It is in the one-man production Van Wyk, the Storyteller of Riverlea, written by Meas and directed by Christo Davids, that one questions why heroes are only celebrated after they die.

Van Wyk was a renowned author and poet who grew up in Riverlea, west of Joburg.

Apart from holding down a day job at the Independent South African Committee for Higher Education as an educational writer, he penned powerful poems and wrote more than 20 books.

It was Van Wyk's adaptation of Nelson Mandela's Long Walk To Freedom into a children's book, his poem In Detention - that talks about deaths of political activists in prisons - and his childhood memoir Shirley, Goodness and Mercy, that eventually brought him recognition.

Meas, who is currently on e.tv drama Scandal! and is also from Riverlea, says he knew Van Wyk well and felt it was necessary to pay tribute to him. The former 7de Laan actor also credits the writer with his own success.

He first met Van Wyk as a high school pupil when he was taking on a character in a play called Flats - an adaptation of one of Van Wyk's short stories. The role saw him win an award and planted in him the seed to pursue acting.

In the one-man play, Meas, himself a published author and film producer, picks up the story of the iconic author after he died from cancer in 2014.

He is stuck somewhere between heaven and earth as he ponders whether he accomplished enough in his 57 years.

In the reflections, Van Wyk recounts the short stories he has written, his hard-working but not-so-clued-up father, two sons and his wife.

He remembers how reading and writing was his joy since childhood and how he often helped kids in the neighbourhood who'd rather play ball than learn how to read and spell properly.

Legendary thespian has new play on stage and film role.
Lifestyle
3 years ago

He relates how he penned his first poem as a little boy by candle light - the message is hauntingly true and mature.

A truly profound scene is when Meas, as Chris, frantically writes a response to a newspaper columnist who dared insult "coloured women" in a satirical column.

In his letter, titled Dear Poppetjie, Van Wyk, usually a humorous guy, shows his frustration and displays just how hurtful words can be. But he brings it back, to much applause from the audience, when he says: "You are what many would call a poppetjie: pretty, but pretty stupid."

As he goes through the great African authors who inspired him, he tells how the greatest stories can mirror one's own lived experiences.

With Shirley, Goodness and Mercy, Meas educates audiences on how Van Wyk used to jot down his own memories and before he knew it he had a best-seller in his hands.

The title was coined when Van Wyk replaced a Bible verse from Psalm 23, that says "Surely, goodness and mercy will follow me..."

Life wasn't always about jokes. In his delivery of In Detention, Meas, as tired and confused Van Wyk, brings the packed Maine Minnie Theatre to tears. With knots in their throats, they rise as they give him a standing ovation.

- Van Wyk's run at the Market Theatre, in downtown Johannesburg, ends on February 24