Previously married to Thomas Msengana, the recently divorced singer and media personality said she is only now discovering who she truly is and what she likes.

She told Whitfield that she spends her hard-earned cash on lifetime memories and revealed that her weaknesses are travel, shoes and her skin.

"I have a weakness for red bottoms - Christian Louboutin. Because you live once, things are meant to be enjoyed. I lost count on how many pairs I have," she said.

Asked if she had more pairs than she can wear in a month, she admitted she does and that's only one brand.

"You forget Valentinos, Guccis and..." she added.

"I was in Madrid with my partner at the time in 2005. I saved money for these shoes because of my love for them.

"We walked for five hours being sent from pillar to post trying to find them. When we eventually found them, my partner said I may as well buy two pairs. I wore Louboutins on both my white wedding and my traditional wedding."

She explained that she first fell in love with the sexy soles when she noticed Oprah Winfrey wearing a pair.

"I loved the sensuality of it. I loved the red especially. I also read up on this designer and how he started and shapes every shoe to show off the art of a woman's sensual foot," Nkayi said.

But she points out that they are only pretty to look at and not practical walking shoes. "Even the designer says the shoes are made to sit in and pose. Let Cardi B tell you too. I tell you, it's the most uncomfortable shoes. I always carry flats like sandals or sneakers in my handbag depending on the occasion as a back up."

Nkayi said, though she now owns many pairs, she is not a lavish or "showy" person and therefore won't reveal just how much moola she's forked out on these killer heels. 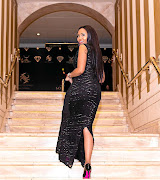 Nkayi is not the only red-heel slave. Bonang Matheba, who owns more than 200 pairs of shoes, raved on documentary Six Zeroes to My Name how she spent R11,000 on one pair of designer heels. She regularly shares social media images of Christian Louboutin, which she says is her favourite label and she wears it on Wednesdays. Lerato Kganyago also owns several pairs as does the former first lady of finance Norma Gigaba.

Nkayi said her various jobs pay for the different perks of her life.

As a co-owner of Lucky Bean media, a production company, she uses this money to pay for her major living expenses.

"I have different streams of income - TV host, MC, facilitator and my music. Broadcasting covers my travel. Idols knows I invoice at the end of year, which covers holidays and things like school fees. MCing and performing is freelance money and I fund my tours myself. My last tour was extremely successful. I spend big money on anything."

She said her most extravagant holiday was her trip to Amsterdam in 2016 to see Beyoncé's formation tour.

"I had to go see Beyoncé somewhere in the world - she wasn't coming to SA, Africa wasn't part of her formation tour date.

"I literally flew myself to Amsterdam first class, booked a wonderful lavish apartment, darling. I walked into Gstar until they knew me by name. I spend on lifetime memories," said Nkayi.