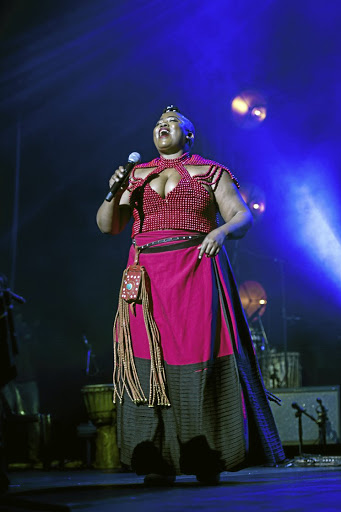 And on the second anniversary of that day to the hour and minute, she walked onto the stage at the Lyric Theatre, Gold Reef City, to tell a story of the African continent. The story, or the specially curated show, was titled A Letter to Azania.

It is not clear if the dates were synchronised or if it was pure coincidence. Whatever the case may have been, it was another epic show by one of the country's most tireless activists of the preservation of African culture of her generation.

Her fans, who filled up the venue to the rafters, were treated to an experience of the African story told in song.

Dressed in her trademark ankle-length Xhosa tradition-inspired red dress with white Converse All Star canvas shoes, she opened the show with the national anthem.

She was only accompanied by her bass guitarist and the solemn moment sent the crowd into total silence with sporadic muffles as the emotions kicked in.

Like a diviner who was about to heal the troubled souls before her, she symbolically lit a candle and put it on a small table on the edge of the stage. Also on the table was a stack of books and an ichaka, commonly known as Igbo rattles. She then went into a chant where she summoned the spirits by calling some of Africa's foremost liberators, kings, queens and other eminent ancestors such as Hintsa, Mandela, Mzilikazi, Nkrumah, Nyerere, Nefertiti and Selassie.

The production team came to the party with an inspiring show of videos and photographs of ordinary Africans going about the most basic daily business like tilling the land, herding cattle and taking care of children.

These were beamed on a big screen at the back of the stage, giving context to the message that Mazwai wanted to deliver to the audience.

The story was not only about glory and triumph but also served to remind the audience of some of the problems that the continent still faces, including poverty and civil wars.

Her first set was arranged around the Struggle and protest using conscious tunes like Zabalaza, Cape to Cairo and Jikijela. 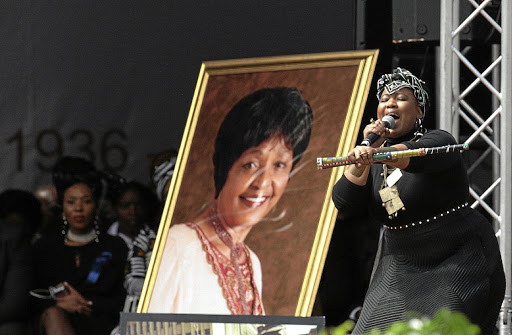 But it was not all snotand tears as she ensured everyone went to the break in high spirits. She did a cover of the late legend Bra Hugh Masekela's Stimela, cow bell and all.

The house came down.

If one of Mazwai's mentors, Busi Mhlongo, was still alive, she would have been more proud of the second set.

It started with high-energy ancestral calling in isiXhosa. She appeared to be in a trance as she communicated with her own ancestors in the medium that only she could understand.

If music is indeed food for the soul, Mazwai then fed the many souls present when she closed off the night with Lahlumlenze from her maiden solo album Zabalaza.

They stood and danced the night away.

In case you missed this storytelling experience, make sure you catch her at the Afropunk Fest Joburg at Constitution Hill on December 30 and 31.