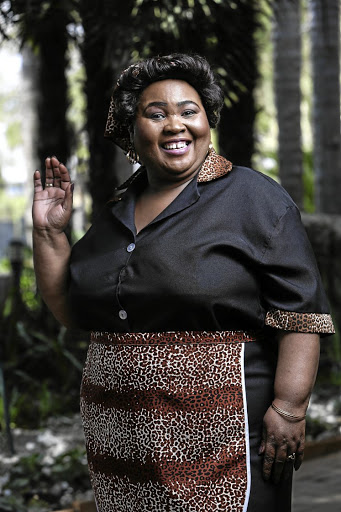 Thembsie Matu is a natural entertainer.

Thembsie Matu is so funny that even seasoned comedians feel threatened by her talent.

Having found fame on TV adverts back in the early 2000s, she says being a natural comedian set off her career.

"I was booked to appear in Kimberley at the Diamonds and Dorings Music Festival. They told me I need to make jokes for like five minutes on stage. I was so petrified because I didn't know what to do. But they paid the money so I had no choice but to go.

"Needless to say I spoke for 20 minutes. People laughed with me, not at me - much to the annoyance of some high-profile female comedian who tried to belittle me. She was annoyed, saying people who think they are funny will speak more than five minutes while speaking nonsense. Imagine!

"But the crowd loved me and I have since decided stand-up is something I will do one day."

These awards are thanks to the role of domestic worker Petronella who has an interesting love/hate relationship with her employer in the Mzansi soapie, The Queen.

Matu explains how she gets into character. "I tap into three different personas to bring out the best of the character. I look at people I know. The cheeky aunties who take no nonsense and those women who think they are up there when they are not. I improvise on set too."

Having previously played Sis Ribs on Mzansi drama Rockville, she was also the most lovable Tinkerbell to grace the stage in the Peter Pan pantomime.

"I'm born this way. People may be surprised though that in reality I am rather quiet - still funny, but quiet," says the 53 year old whose real name is Nomathemba.

Born in Katlehong, Ekurhuleni, she says her uncle flipped when she told him she would rather die than become a nurse.

"In primary school I was exposed to drama; I had this itch to perform. I knew then I would be an actress one day. When Gibson Kente brought one of his shows to town I was convinced it was my calling. I turned and said to my uncle 'this is what I'm going to do, Act!' He shouted at me, saying I'm crazy because how will this acting thing pay for my livelihood. He maintained it was a not a real job."

Nevertheless, she was encouraged by her older sister who was a Fort Hare University student at the time to join the Gibson Kente school of acting. She made her professional stage debut in Kente's Sekunjalo in 1986.

But it was the Doom, Joko and Cell C ads in the early 2000s that had thousands sit up and notice her comedic talent.

However, the married mother of two says comedy is not her only strong point. "I can be the most serious of actors and I'm waiting to coin that big international role. I may be 53 now but I feel like I'm 35. I have a lot more to offer in this industry."