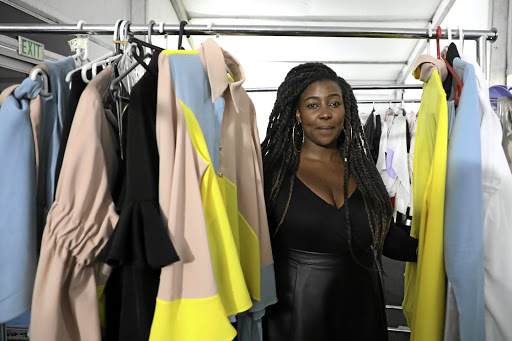 There was an electric current in the air, the buzz of conversation and every sparkling accessory you could think of. The fashion crowd had descended upon the Protea Court in Sandton City for the SA Fashion Week, as influencers and critics jostled to be let in like prized thoroughbreds before a race.

The first show on Tuesday night was dubbed the New Talent Search show.

This year's designers showed that it is imperative to have an injection of new blood in any industry.

Opening with the label Artclub and Friends, with ensembles that only the coolest kids would wear to a safari, there were pants with oversized pockets, large safari sleeveless jackets and pastel-hued mesh hats with gauzy veils as accessories. Each designer had a striking statement piece that thrilled the crowd.

There was playful athletic wear by Outerwear, ultra-feminine looks from ODE and a riot of colour by the New Talent Search winner Cindy Mfabe.

Mfabe's models stormed the runway like butterflies in a meadow, in breezy garments with clean lines and elaborate ribbons on sleeves.

After walking the runway for her victory lap, a tearful Mfabe took in the audience's applause. "I'm very excited, I'm very excited for my future," said the 27-year-old, looking slightly overwhelmed and teary-eyed backstage.

Crowns made not to get you sweaty.
Lifestyle
3 years ago

The colours from her collection were inspired by a painting titled Disappear by South African artist Lionel Smit.

"I liked the colour palettes. It was quite bright with the accented colours muted by dim ones like dusky pink and black. I wanted to have a juxtaposition between femininity and masculinity."

She expressed that it took quite a while to put together the collection as her biggest challenge was finances.

Luckily for her, she had the support of well-meaning people within her circle.

"I just knew I had to finish this . I had a few people helping me, like literally, I had a support structure, getting me through, stitching the stuff and putting it together and transporting me wherever I needed to be," she said.

Mfabe plans to enter the retail space, and says her win is bringing her closer to penetrating the market. She started sketching when she was 12 using her mother's magazines as inspiration. By the time she was in matric, she knew she wanted to be a fashion designer. "Just keep on keeping on; anything is possible" she advises aspirant designers.