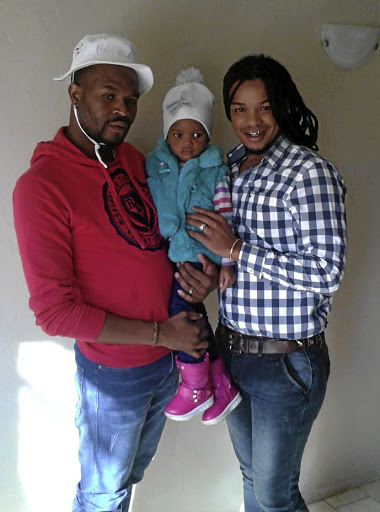 Sbusiso, left, and Sabelo Makhanya and their beautiful daughter, Ndalo

Sabelo and Sbusiso Makhanya were the first gay Zulu couple to choose the surrogacy route back in 2014.

It was not an easy decision for the two as they came from very conservative families.

Their love story started out very simply. It was love at first sight in Maboneng, Johannesburg, when the two met during a night out.

"More drinks and more stares. So I went to the lavatory and he followed me and asked for my number. I didn't hesitate, and the rest, as they say, was history," Sabelo says.

Despite both coming from families rooted in deep Zulu traditions in KwaZulu-Natal, Sbusiso asked for Sabelo's hand in marriage.

Sbusiso's family didn't understand the relationship at first, but finally accepted Sabelo. However, the family wanted a child.

"I knew that I couldn't give him children. It was biologically impossible. I even proposed that he marry somebody else [a woman] who would bear him children, but he refused," Sabelo says.

Katlego Maboe has confirmed that he and his partner Monique Muller have welcomed a son into the world.
Pic of The Day
3 years ago

When they'd explored all their options, Sabelo suggested they get a divorce as he was not able to give him children but Sbusiso refused saying that he was "the love of his life".

They then heard of the surrogacy option and started doing their research and even flew to the UK for more research.

"It was an expensive exercise but we were prepared to go through all the lengths for our marriage," Sabelo says.

"Everything, including the attorneys, the doctors, the Lancet Laboratory, flights and so forth. Our overall cost was R650000."

The egg was from a clinic called Egg to Mum.

Finding a surrogate was a mission and they were running out of time.

"The lab kept calling to tell us that our ovary that is already fertilised is going to die if we don't find a surrogate."

AKA shows his softer side at launch.
Lifestyle
3 years ago

All this time their surrogate was right next to them. Sabelo expressed his frustrations to his best friend, Xolisile Shelembe, who thereafter didn't hesitate to volunteer being their surrogate.

The implantation was successful on the first attempt.

The couple both gave sperm samples and asked the experts to keep the successful sperm donor anonymous. "We didn't want the other to feel it's one's kid over the other. We are both her parents," Sabelo says.

Their best friend gave birth to their daughter at Charlotte Maxeke Hospital's private ward in Johannesburg on December 4 2015.

Sabelo and Sbusiso are now the proud fathers of their beautiful two-year-old daughter, Ndalo. "She's literally the best thing that's ever happened to us," Sbusiso says.

Father's Day turned out to be super special for Black Motion's Thabo Smols‚ who welcomed his first bundle of joy with bae Rakgadi Sedy Koetle ...
Shwashwi
3 years ago
Next Article