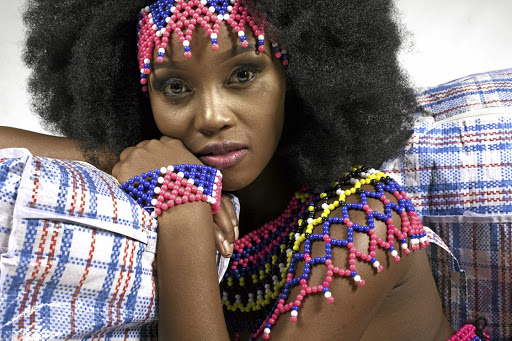 "If you were in jail, what crime would you have most likely committed?"

Maskandi artist Nelisiwe Sibiya was asked that question while she was struggling to come up with a theme song for gritty local prison drama series, Lockdown.

She tapped into memories of a painful past - of an abusive uncle she felt she could murder - in coming up with Mama Ka Bafana, the heart-wrenching theme song, she revealed.

The song expresses the feelings of a girl who unintentionally murdered her abusive boyfriend, she explained.

Sibiya said her painful journey began after she moved to her aunt's house in Duduza, Nigel, east of Joburg, with her mother and her sister.

She said her aunt's husband treated them badly and always reminded them that he was giving them a roof over their heads.

But that was not the end of her problems. "My aunt's husband held me to ransom by making debt against my name.

"I have debts now because he used to open accounts and take loans using my name," said the 25-year-old songstress, who is originally from KwaZulu-Natal.

"When I had enough money I went back to Empangeni in KZN, where I was born, to build myself a house. It is now a family home. I no longer have contact with him."

Sibiya told Sunday World that she was discovered on Instagram by Lockdown producer Mandla Ngcongwane in 2016.

She said she became a breadwinner after her mother's passing in 2016, just before her big break.

"After the funeral, I came back to Joburg and that's when Mandla spoke to me about the drama and about jail life. He asked me if I had to be in jail what would be my crime?

"I said, 'if only I could kill a man'. The line stimulated the idea to sing Mama Ka Bafana."

The musical theatre graduate said things were looking up for her since she got her big break.

She said her new single, Nomathemba, was doing well on Google Play and hopes that radio stations will warm to it soon.

Jazz icon's individuality recalled after his death.
Entertainment
4 years ago
Next Article