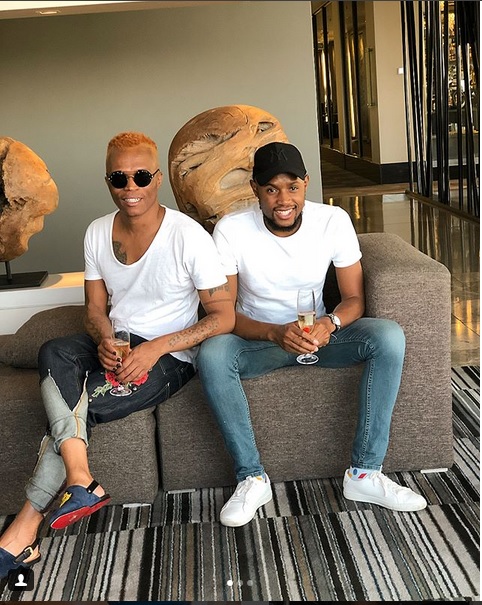 A new season of Somizi's reality show‚ Living The Dream With Somizi‚ means that fans get a front row seat into Somizi's life. And that included getting to know his fiancé‚ Mohale Motaung. But‚ so far‚ Mohale has been a closed book.

On pictures‚ the pair seem perfect. And if you look on their social media accounts‚ they're clearly smitten.

But viewers of the show have increasingly noticed an "oddness" and even some "awkwardness" in Somizi's bae.

While it may just be that he's not used to the invasion of privacy the constant cameras bring or maybe that he's the shy type‚ Somizi's fans are finding it hard to "warm-up" to him.

It's been over three weeks since the show began and fans have shared what they think about Mohale.

Not sure if mohale is just like that but you'd swear he's just pretending, he doesn't look comfortable at all.#LTDWSomizi

They don't trust Mohale... "Something about him is off‚" one of them said. The memes came flooding in.

Mohale seems as a person who not there to stay. It's all displayed on his face.
The pretence and the way he seems offish and uncomfortable ingathi he is been forced to be part of the show. Save this tweet for future purposes ningathi zange ngitsho#LTDWSomizi pic.twitter.com/JOjkZef4ms

#LTDWSomizi
Living the dream with Somizi, Mohale and Thami pic.twitter.com/XuN0BoRaJY

Is Mohale really gay?? Was he gay before he met Somizi that day??? This whole thing is one sided. Coz he seems totally disinterested and forced to be here. There's no chemistry between them. It's like he's in it for money #LTDWSomizi pic.twitter.com/EHuwSDTMNC

Despite not "fully" understanding Mohale's personality‚ other fans of the show still love Mohale and SomGaga's love.

They stan forever and have asked others to leave Mohale alone.

Eish. Maybe the guys just doesn't like the cameras‚ fam.