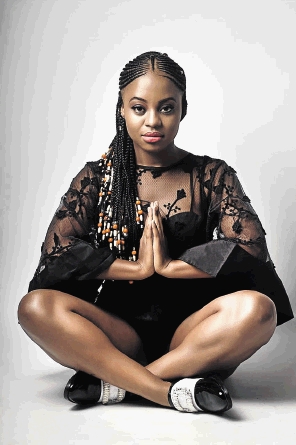 Actress Gabisile Tshabalala has credited her new-found radiant looks to her divorce from alcohol.

Tshabalala, 28, said she had not touched the fire waters in three years and has never been happier.

"I look younger than my age because I don't drink anymore. When I used to drink I looked ugly and old," she said.

Tshabalala, best known for her role as Pinkie Mojeki in the SABC2 drama series Hola Mpintshi, said she quit booze because she did not see the use of drinking anymore.

She told Sunday World that she was able to stop gradually even though she had never imagined her life without drinking before.

"I prayed about it because I had thought about stopping for a long time. I started to drink less and eventually stopped completely," she said.

Tshabalala, who is also a singer and presenter, is back on the second season of Throw Back Thursday, a variety show she will be co-hosting with comedian Skhumba on SABC1 every Thursday night.

The Uzalo actor is joined by radio presenters TBose and Naked DJ.
Lifestyle
4 years ago

She said she was recommended by the comedian and when she met the producers of the show they liked her instantly.

"I was a little sceptical at first because the show is a comedy and I would be co-hosting with a comedian.

"I thought what am I going to be doing? Should I try to be funny? But I got there and did my thing."

The show is mainly based on what [people] do and say on social media. Tshabalala said the show helped people relax and unwind since "life is too serious".

Her acting career began at the age of 19 when she auditioned for SABC's Hola Mpintshi and got a lead role.

Loyiso Bala has taken a stand against radio and TV stations.
Shwashwi
4 years ago
Next Article