Pearl Monama unfazed by backlash over her Generations character 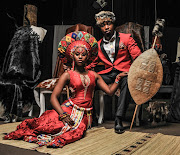 Actress Pearl Monama has had her fair share of backlash for her role as Sphesihle 'Sphe' Cele but says that she has learnt to shrug off the hate her character sometimes gets.

Sphe might be one of the most popular characters on the show but her transition from a shy and unassuming young girl to a rebel has got people talking.

Speaking to TshisaLIVE‚ Pearl said it has been a challenge to transition with the character.

"I have really enjoyed my role on the show so far but the most challenging part has been moving with her through her different situations. When she started she was humble and respectful. Now she is something else. She backchats her parents and fights with her in-laws. Her character gets backlash but I have learnt to understand that there is a difference between the character and me."

Pearl said that while her character often demands attention‚ she is a lot more reserved.

The actress said that even some of her friends refer to her as Sphe and that she's learnt to not take criticism about her character too seriously.

"Whatever backlash she gets means that I am doing a good job in portraying her and bringing out emotions. So I don't take it personally. Not everyone is going to love the character and what she does. If they are criticising her‚ it means they are recognising something in her that is in themselves as well."

While she has had two years to get used to the fame that comes from working on Generations‚ Pearl said the attention was sometimes overwhelming.

"People think that I am the person that I am on TV. They see me and expect me to know them. I never know how to receive that‚ especially when they are over excited. They can sometimes get carried away. They pull you in different directions."

Pearl has used her fame to also mentor and instruct young actors at the University of Pretoria's drama department.

"The lecturer asked me to come in and help out because they felt that the students were detaching themselves from the seriousness of the arts. I want people to know that if your passion is just acting‚ that is alright. You don't have to be a singer‚ actor‚ presenter and producer to be a success."