Tycoon credits his wives for his empire 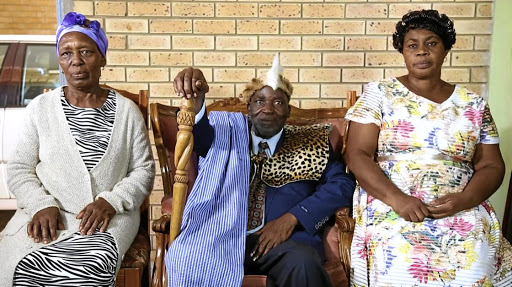 Limpopo businessman Ephraim Masutha with his wives Anna, left, and Maria, who are sisters.
Image: Supplied

Limpopo businessman and traditional healer Ephraim "Jealous" Masutha commands respect in his community after starting a business empire selling fruit and vegetables from his bicycle.

Masutha, from the remote village of Mamaila Kolobetona on the outskirts of Modjadjiskloof, might not have formal education but has since established a string of supermarkets, hardware stores, a hotel, funeral parlour and a filling station.

But what most people were not privy to until Masutha gave a rare interview on Wednesday to DStv's new reality show presented by award-winning investigative journalist Mzilikazi wa Afrika, was that his secret to success was tied to his polygamous marriage to sisters Anna and Maria.

The two, Masutha said in his interview, played a significant role in the success of his businesses. To him, his marriage to the sisters was not taboo but a blessing.

During his interview on Sofa Slahlane, Masutha, 79, pays tribute to his wives and credits them for helping him build his business empire.

Musa Mseleku and his wives‚ who were legally married did not have any official ceremonies.
Entertainment
4 years ago

He said he was following in the footsteps of his father who was married and lived with five wives in the same homestead.

Describing how it all began, Masutha told the show that he never planned to marry the two sisters, saying all was due to unforeseen circumstances.

The man, who quit his job as a farm labourer at the world famous ZZ2 tomato farm at the age of 18, said he admired his wife Anna's younger sister, Maria's hard work.

"She used to come visit us during school holidays to help with raising our child. At the time I had also bought a supermarket and she was also helping us run it," said Masutha.

"I feared that the business would collapse if she was to leave us. But the decision was not an easy one ... it confused her (Anna) and it was very hard on her but she ended up agreeing to the marriage."

The two sisters said that they did not agree to the arrangement but gave in after Masutha showed his determination to make it work.

Masutha has 12 children with his wives.

Two of them are girls.

Cultural expert Dr Mathole Motshekga said Masutha's polygamous marriage to sisters was not taboo: "It's been happening before in cases whereby a married woman was unable to bear children for her husband, her younger sister would be brought in to help carry her sister's kids."

Minnie on married life: 'My heart is safe'

Despite constantly being the subject of pesky rumours‚ Minnie and Quinton Jones are very much loving every moment of married life.
Entertainment
4 years ago
Next Article