Isibaya actor Andile Mxakaza: My mentors made me the great artist I've become 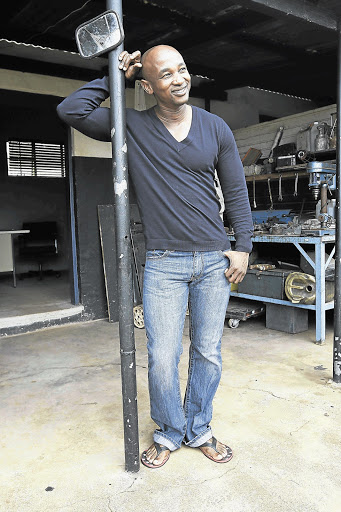 Andile Mxakaza, who plays Fezile on Isibaya, moved to Joburg after school to become a model.
Image: Tshepo Kekana

The man behind Isibaya’s Fezile is a mystery to many and actor Andile Mxakaza has told TshisaLIVE that its a result of a conscious decision he took years ago.

Andile made sure to separate his personal from his work life very early in his career.

The actor‚ who is turning 40 this year‚ said he’s kept to himself because he wanted people to reserve judgement for his job‚ not who he is.

He opened up briefly about his “past life” where he described himself as township hustler.

“All I’m willing to share is there was an era where I was a model and a time before that when I was a curious teenager. My father and I didn’t get along for the longest time because he thought I would end up as a thug due to my actions when I was younger. But‚ it was just a phase‚ a part in the story that ends with me finding myself and becoming who I’ve turned out to be.”

Andile said when he turned 26-years he fixed his relationship with his father.

He said that was one of the best decision he took in his life because he now gets to enjoy the “blessing that is my father and mother“. Andile said he sees how proud they are of him whenever they speak about the man he became.

The actor‚ who admitted that he learned all he knows about acting on the job‚ told TshisaLIVE that he began believing in his God-given talent after some veteran actors validated his gift.

It seems Celeste Ntuli's rant over Zodwa Wabantu's pantyless antics may have opened the door for others to speak out and actress Ayanda Borotho has ...
Lifestyle
4 years ago

“I’ve learnt a lot. The most important lesson I’ve been taught is that an artist’s love for his craft must be renewed everyday. I also have my mentors to thank. In fact‚ they made me. I am lucky to have worked with the people I have because they built the artist I’ve become.”

Although he’s indecisive about accepting the fact that his career means he’s a celebrity‚ Andile is certain that he is exactly where he was meant to end up.

He said he still wants to explore different roles and his career would be complete if he got to play a “pastor‚ a gangster and a blind man“.

“I realised that I was absolutely captured by acting when I couldn’t stop thinking about how to improve. I would go jogging and think about my character. It’s to such an extent that I burn incense if I feel like I am blocked. I realised I can do this even better than other actors in the industry‚ if I just continuously continued working on it. All want to give is my best.”