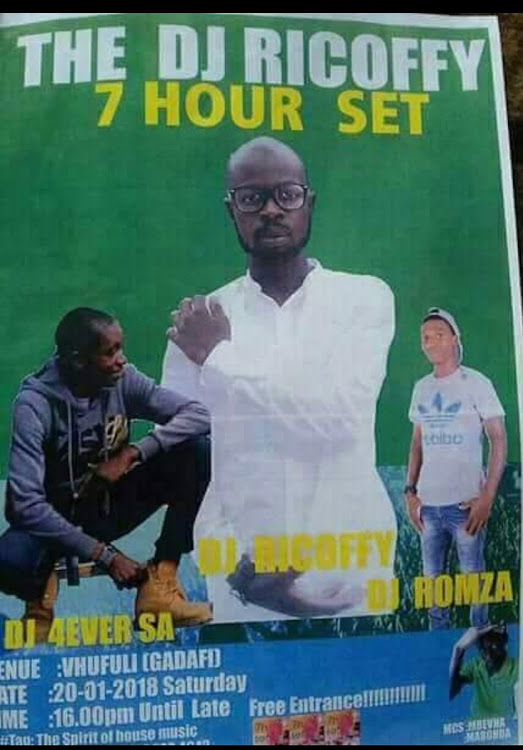 A few days ago DJ Black Coffee focused the spotlight on an unknown DJ who appears to be his doppelgänger and‚ coincidentally‚ happens to be a DJ by the stage name Ricoffy.

Since then‚ Emmanuel Ramaliba has become a topic of interest for many.

The similarities between the two left Twitter in shock and the upcoming DJ told TshisaLIVE people have been confusing him for Black Coffee for as long as he could remember.

"All my life I've been told‚ like everywhere I went‚ that I really look like Black Coffee. Then one day as I was setting up to play at some place outside my town‚ one guy shouted 'Hey DJ Ricoffy!' and it stuck. I'm not just Black Coffee's look-alike‚ I'm following in his steps."

Emmanuel explained that his love for music began when he was still a teenager and would see him following DJs around.

The self-taught DJ said spending time with various DJs led to him picking up a few skills and his interest also grew.

"Now I am a DJ‚ I am doing well. I started in 2010 and I've been doing that in between other things‚ like school. I am focusing on music now and have a few gigs that have helped me get my name out. I would love to end up in Joburg playing at big clubs but I just haven't found an in yet."

The 26-year-old said he studied electrical engineering at Venda TVET College. He explained that he is based in Venda‚ which is his place of birth. He said that he's passion for music and house music in particular made it hard for him to stay away from being a DJ.

Ricoffy said he aspired to be like the "the great" DJ Black Coffee and his biggest dream come true would be to meet the man and get a few pearls of wisdom.

"That man is a living legend. He is a hard worker who is an inspiration to many and to be seen by him gave me so much joy. I do wish to meet him‚ as that would be a dream come true for me and to talk to him would mean everything to me."

After landing a four months residency from June until September at HI Club in Ibiza, DJ Black Coffee will play his final set this weekend. His recent ...
S Mag
4 years ago
Next Article