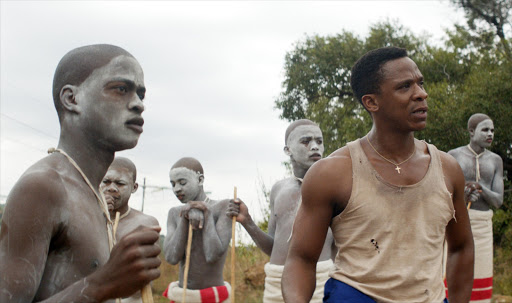 Despite scooping 19 international awards‚ being shortlisted for an Oscar and receiving global recognition‚ you would think the creators of The Wound (Inxeba) are rolling in cash‚ but that couldn't be further from the truth.

During an exclusive pre-screening of the film hosted by TshisaLIVE on Wednesday night producer Elias Ribeiro gave the audience a glimpse into some of the challenges they have faced to make their dream of bringing the eye-opening film to local screens.

Elias revealed that some members of the team worked for free‚ while cast members earned a pittance and that they got into a lot of debt for marketing costs to take the film to Oscar pre-screenings in Los Angeles.

He explained that he was brought onto the project to help with foreign funding as the National Film and Video Foundation (NFVF) initially rejected their requests for funding on four occasions.

However‚ the NFVF came on board after seeing the international attention the film got.

"The NFVF saw the film again at post-production stage but had no contribution or say in the production process. They came on board after we got an invitation to the Sundance Film Festival and they gave us a chunk of change to put their logo on it. We weren't desperate (for funding from them)‚" Elias said.

Elias added that many of the cast members were paid a basic salary and producers often worked for free.

"The misconception is that we are rich guys exploiting other people's culture but the truth is (screenplay writer) Malusi (Bengu) worked for free on this film for about four years. I might get paid soon. Niza (Jay Ncoyini) cannot really afford six months of rent and food with the salary he earned working really hard on this film. We are still trying to make financial sense of this endeavour."

He later explained that while 80 percent of the film's budget was raised before the project wrapped up‚ the main creators had to for go a salary until the funds could be raised.

“There was a lot of patchwork. We got funding from international film bodies and from winning awards‚ like at the Venice Film Festival‚ but we really had to make it up as we went along."

Internationally acclaimed South African film ‘Inxeba (The Wound)’ premiered on January 30, 2018. Here’s what South African celebrities had to say about it.

Elias said the biggest achievement of the project was how it disrupted the status quo and started dialogue about issues which were previously swept under the carpet.

He also said that 85% of people who attended Oscar pre-screenings of the film gave it the thumbs up and thought it should’ve been nominated for an Oscar.

The film was shortlisted for a nomination in the Best Foreign Film category ahead of the 2018 Oscar Awards‚ which cost the producers millions to market and campaign. Elias said they needed a "miracle" to make money from the film.

"It cost us a s**t load of money. It was a ridiculous investment because the academy only does one screening per film and we had to create as many opportunities as possible for as many judges as possible to see the film. We also had to bring the talent to LA. It was a good run but we wrote up a lot of debt because of it. So before we see any money we have to settle the marketing and PR bill.

Popular soapies Generations: The Legacy and Muvhango will once again be snubbing the (SAFTAs).
Entertainment
4 years ago

"Historically‚ a film like this to make more than a million or two in the box-office is unheard of. We basically need a miracle to actually fulfill the prophecy that we are going to be rich off this film".

He said the struggle was now to pay the rent and make sure they could finance their next project.

"The big question is how do we pay the rent now? And we have been lucky enough to get funding for our next project which helps a lot‚" Elias added.

The film has courted controversy since the trailer for it was released early last year. It was criticised by traditional leaders and social media users for its portrayal of the Xhosa initiation ceremony.

One of the film's writers‚ Thando Mqgolozona‚ said he was labelled a sell-out by those closest to him for this portrayal.

He said his motivation to make the film was to show that black men could be more than what society dictated they should be like.

"We were trying to portray a black man that is different to the archetype that we have lived with. We know the macho guy. We know that boys don't cry. I don't think it is necessary to portray anything but an alternative. Maybe there is a shade of grey. Maybe there is a shade of black. Because the moment we are all allowed to express ourselves‚ we are free. Right now‚ you try and get a hug or get comforted as a black man‚ and you still can't get over your own personal sh*t to get to that point. You can't express yourself."

Protesters from the Man and Boy Foundation (MBF) apparently staged a sit-in at the Film and Publication Board (FPB) offices in Centurion this week to demand the film be cancelled or edited.

Niza responded to this action‚ claiming that if they had seen the film they may possibly not feel the way they do.

"We didn't make this film for people who watched the trailer and jump to conclusions. It is like a person who looks at windows and think they know the house."

The Wound opens at local cinemas on Friday February 2.

The hits and misses from the 2018 Sun Met (Photos)

The annual Sun Met took place on Saturday afternoon at the Kenilworth Racecourse, in Cape Town.
Shwashwi
4 years ago
Next Article