Designer Asanda accuses Isibaya of dress plagiarism: My brand has been devalued 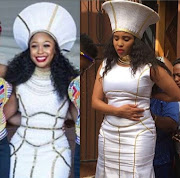 Designer Asanda Madyibi has slammed the directors of Isibaya after images of an upcoming wedding on the telenovela showed actress Linda Mtoba‚ who plays Zama‚ wearing a dress identical to the one she designed last year for Minnie Dlamini’s wedding.

Zalebs reported that behind the scenes images of the wedding dress were released and they clearly show the dress used on the show to be identical to that of Asanda’s design.

“I didn’t consent for them to imitate my design. TV is a powerful tool and should be used wisely. This is a loss for me. My design has been watered down and it’s a mediocre attempt to replicate the dress. This is a blatant disrespect for my creativity and they’ve made a mockery of my design‚” the designer told TshisaLIVE.

Asanda said that the show had thousands of followers and watered down the value of her design because it took away from future customers saying they want “Minnie’s dress.”

She said the only recourse for her as a designer is to call them out publicly about the copycat design and posted a message on her Instagram with an image of the two dresses together.

Speechless! They say imitation is the highest form of flattery! Is this flattering? In the history of south african television production weddings I have never seen such! The article @zalebs is not flattering to my art quote ' she looked as gorgeous as Minnie Dlamini at her traditional wedding.' Ok

A day after questions were sent to Mzansi Magic‚ the channel responded and downplayed the claims. It said the images of the dress were never supposed to be released and formed part of the “development of potential wardrobe options.”

Although it is unclear what the “development of potential wardrobe options” means‚ the channel said it had reached out to Minnie.

“Bomb Productions will be making contact with the designer to apologise for this incident and Minnie has also been contacted to apologise for any inconvenience caused‚” said Mzansi Magic’s Nondumiso Mabece.

Asanda‚ however‚ is not buying it and has cried foul on the channel’s intentions.

She said that directors only reached out to Minnie after TshisaLIVE sent them questions‚ drawing attention to the matter‚ and were happy to ignore the issue when she raised it on social media.

“All of their actions show a total lack of integrity. They contacted Minnie after you (TshisaLIVE) sent questions. They’ve removed the picture but that doesn’t help matters. My brand has been diminished. It has devalued the dress and even though they are now backtracking and say they are not using the dress‚ the damage has been done.”