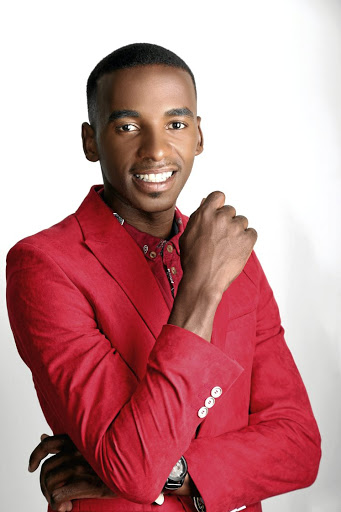 Luzuko Nteleko gave out fliers and pamphlets at intersections around Joburg while growing up. Things are now looking up for the Ngqeleni-born (Mthatha) actor. / Supplied

It took an international production house to spot SABC2's Mamello actor and entertainer Luzuko Nteleko's talent after four years of being in the doldrums.

Popularly known as the face of Absa's banking App TV commercial, Nteleko has come a long way since the days his sister Nomsa hooked him up with a pamphlet distribution firm to hand out fliers at Jozi intersections in the early 2000s.

As a teen, Nteleko, now 33, travelled from his home town of Sebokeng in the Vaal by train to Joburg, just to earn R20 to R30 a day after dropping out of his tourism management studies at Wits University in 2002.

His big TV break came when a British production house cast him in the lead role of a 2004 docu-drama flighted on DStv's Discovery Channel.

"I had to endure four frustrating years of auditioning before being featured on local TV. Now it seems surreal. I've played so may roles I've lost count, thanks to Napo Mashiane, who showed me the ropes at the Windybrow Theatre," said Nteleko.

TV actress Katlego Danke may be one of the most family-focused celebs in South Africa but she is not about to bow to pressure to add to her brood.
Entertainment
4 years ago

"I then said to myself, 'I'm so lucky, God has a purpose for everyone of us', it has been blessings all the way.

"I was jealous I was not on Mamello, a show being shot on location in my back yard. I spoke to my agent, they arranged for me to go for auditions."

In his latest project, in which he debuted in August, Nteleko plays a young teacher at the trouble-torn Mamello high school.

"I play Mr Tso (Tsotetsi), a new, fresh from college Grade 10 teacher, who girls are smitten with because they are almost the same age as him - 17 to 20."

The thought of opening up about her life to the public and becoming a reality TV star was one of the most frightening experiences of her life.
Entertainment
4 years ago

Nteleko said Mr Tso is in a dilemma because when he is with other teachers, he is too young to fit in in their discussions and relate to them as peers, the same goes with pupils, he must know his place as a teacher and cannot mess with the girls.

"Mr Tso relates more with pupils. He is tempted. He can, if he wishes, go on dates with the girls but that's unlawful as they are 'underage'. Teen pupils have nicknamed him 'Sir Yummy' because of his handsomeness."

Nteleko said all this attention is flattering and challenging for Mr Tso after one of the girls, Bokang, posts a tweet expressing her crush on him.

Growing up Nteleko never knew what he wanted to do as a young boy in eNgqeleni near Mthatha in the Eastern Cape. He is also an ardent soccer player.