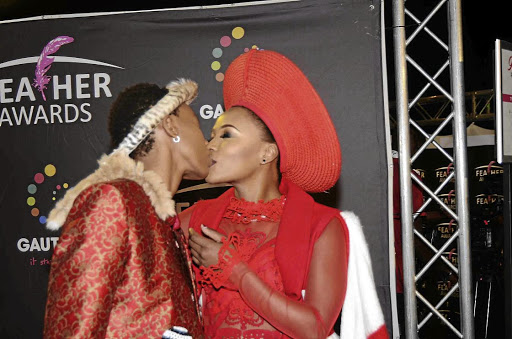 They were crowned Cutest Couple of the Year at the 9th annual Feather Awards at Theatre On Track in Kyalami, Joburg on Thursday.

"Thank you for always letting me squeeze on your butt for good luck," Nduna said jokingly during their acceptance speech.

Nduna, 26, told Sunday World the award means a celebration of their love.

"It's good to know that our love can inspire people to love who they want openly and be themselves," Nduna said.

"It is a sign that the world is opening up to diversity."

She said they were honoured to be the first lesbian couple to receive the award and hope that will open doors for others.

She said marriage will be "a natural progression".

"At the moment we are focusing on building a solid foundation, relationship and an empire for ourselves first."

Ziqubu also said she appreciated that their love was celebrated by most South Africans.

"About 95 percent of people love our love," she said.

However, Ziqubu, 32, said they had learnt to stay away from some places such as clubs in certain areas and they choose carefully who they associate with.

"We have had an incident where a drunk heterosexual man confronted us at a club and became aggressive towards us," she said.

Ziqubu said that they sometimes receive hate messages on social media but they ignore them.

"We just feel it is people who don't know love and we stand up for ourselves against people like that."

She said since their relationship became public, it has not affected her career.

Maditaba dragged herself to the Feather Awards last week. She's not really a fan, especially since cheap boxed wine served years back is embedded in ...
Opinion
4 years ago

"My family is also supportive towards my lifestyle. They know I am a colourful person so they celebrate me for everything that I am," she said.

Speaking of playing twins on the Mzansi Magic's The Imposter, she said: "It was not easy in the sense that I had to make them different and not favour the one over the other. It sometimes required that I go in a dark space for Mantwa who is an ex- convict."

The Imposter follows a story of twin sisters, Mantwa and Matshepo Tau, who find themselves at war. One of the sisters breaks out of prison after spending 17 years there and takes over the wonderful life of her identical twin who is responsible for her incarceration.

She is King is a musical that will screen next month. The film tells the story of a talented singer, dancer and actor who wants to be a star.