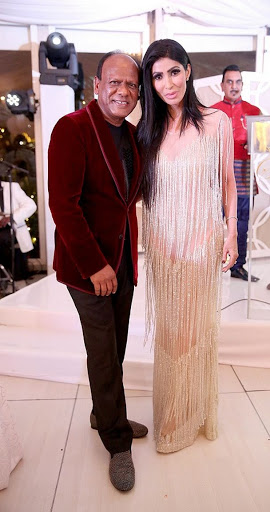 The lavish Beverely Hills hotel in Umhlaga Durban parking bay was the first in SA to park a R4.8 million black Aston Martin DB11 on Saturday night thanks to billionaire Vivian Reddy.

Guests of Sorisha Naidoo, his actress and philanthropist wife, posed and admired the beast parked at the entrance of the hotel not knowing who it belonged to.

Naidoo flew her friends, business associates and media to the upmarket Umhlanga this weekend to celebrate her 40th birthday at the ultra posh Beverly Hills.

The theme was "summer elegance" and most guests complied.

Naidoo made her grand entrance dressed in a nude-coloured gold encrusted number designed by Haroun Hansrot.

This was the second leg of her celebration after she partied with close friends and family in Mauritius earlier this month.

"Mauritius was amazing. We had a party on the yatch, spa treatments and we got to celebrate in style," Naidoo shared.

Inside the hotel, guests were entertained by violinists, love bands, plenty of sushi and expensive champagnes at different food stations featuring Indian and Middle Eastern cuisine.

Naidoo said she  was excited about all the gifts from her wealthy husband including a limited edition Louis Vuitton hand bag from her children.

"I love my LV bag from my kids, it's the first in SA and I hope I don't come across as someone who has it," chuckled the former Scandal! actress.

Reddy told guests about his wife's unfailing commitment to the wellness of his family.

"My wife wakes up in the early hours of the morning to ensure that the children are well prepared for school  and for the day. She takes care of home," Reddy shared.