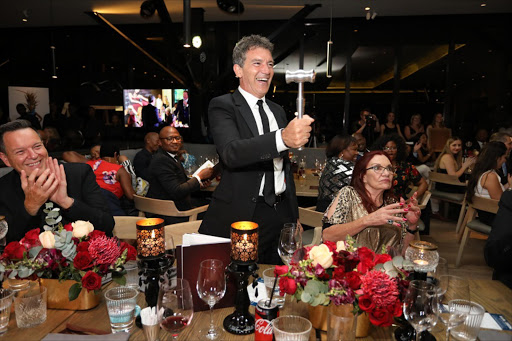 Antonio Banderas brandishes the silver gavel gifted to him by South African auctioneer Joff van Reenen after a charity auction hosted by Banderas this week raised some R1.2 million for Nkosi’s Haven that supports mothers and children affected by HIV/Aids.

Acclaimed Hollywood director‚ producer and actor Antonio Banderas ended his four-day visit to South Africa this week on a high note when he spent more than R400‚000 at a gala charity auction on Thursday night – the bulk of the money on three artworks created by children at Nkosi’s Haven.

Launched in 1999 and named after young Aids activist Nkosi Johnson‚ the charity offers care and support to mothers and children affected by HIV/Aids.

Banderas’ visit this week had a dual purpose: to launch his new fragrance Secret Temptation and as the final exhibition location of his photographic series Women in Gold‚ which has toured the globe for two years raising money for worthy causes.

The auction at Marble in the heart of Johannesburg’s trendy Rosebank was attended by some 200 celebrity and high-flyer corporate guests. And through the dynamic sales technique of High Street Auctions lead auctioneer Joff van Reenen 16 artworks – five from the children of Nkosi’s Haven and 11 from Banderas’ Women in Gold collection – an impressive R1.2-million rand was raised for the charity in little over an hour.

Van Reenen says the success of the auction was without doubt due to the big heart of the guest of honour.

“The first lot of the night was an artwork from a young child at Nkosi’s Haven and not having a read yet on the crowd‚ I decided to jump in at the deep end and start bidding at R10‚000. The first hand that shot up was Antonio’s‚ and the bidding went wild after that. He eventually bought the piece for R200‚000!

Van Reenen says prior to the auction Banderas had expressed some concern that the photographs might not raise enough money for the Haven‚ which he had visited a couple of days before and had witnessed first-hand the dire need for funding.

“He told me the most one of his charity auctions had ever raised was $475‚000 in Rio and said if we could do the same here in rands – given the equivalent spending power – we’d be exceeding all expectations.

“So when we’d sold the last lot I felt compelled to call Antonio up onto the stage. He was clearly surprised‚ but when I told him off-mic how much we had raised he was absolutely dumbstruck‚ and was delighted to take me up on my offer to announce the total proceeds of the sale to the guests.”

But while Banderas gave generously at the auction‚ he received an unexpected and generous keepsake as well.

Van Reenen explained that he conducted the Nkosi’s Haven charity auction with one of a unique matching pair of silver gavels he has owned and treasured for years.

“Banderas’ genuine delight and gratitude at the outcome of the auction was so evident that I did something I’ve never done before‚ which was to present him with the gavel as a memento of the occasion.”

Van Reenen says he has no regrets‚ because the gavel will be put to good use in future.

“Antonio told me after the auction that he returns to his home town in Spain every year to attend its annual festival. He has an important role in the festival proceedings‚ which is to signal by ringing the town bell when the formalities are over and the party begins.

“From now on‚ he plans to use the Nkosi’s Haven auction silver gavel every year to ring the bell for the inhabitants of the town to begin the festivities‚ and I can’t think of a better home for it to go to!”