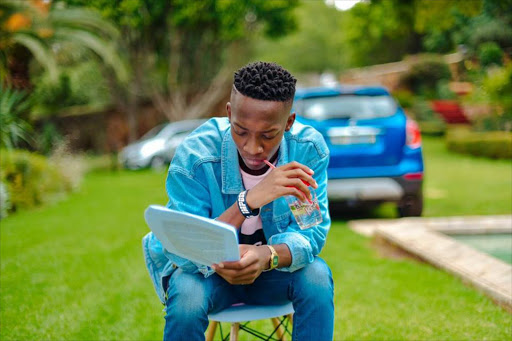 The 21-year-old rapper released Flex Life which features Kwesta and has received props from his peers in the hip-hop industry.

Speaking to TshisaLIVE‚ Dee explained he only realised later that Kwesta was “being real” when he complimented his skills on the rapping competition.

“There was an episode where Kwesta was a guest mentor and he complimented my skills. After Kwesta’s appearance on the show we didn’t speak. I went back to work on my own music which included Flex Life. I wasn’t totally certain that he was being real when he said how good I was because sometimes people act different for TV. But I later found that he was a genuine guy and that’s when I thought of a collaboration‚” he explained.

Dee‚ real name Didintle Mokhine‚ said when he saw Kwesta again at the Vuzu Hustle finale‚ he was shocked when the rapper asked why he hadn’t reached out to him.

Realising that Kwesta was extending a helping hand‚ Dee got his numbers and called him “every day for the whole week“.

The rapper explains that he went on to ask Kwesta to sign him to Rap Lyf but Kwesta declined. Although he didn’t understand why‚ Dee says he used the opportunity to bring his collaboration idea to life.

“Imagine a very successful rapper asking you why you are sleeping on yourself? So I asked him to sign me and he said no. I told him to rather put a verse on my track and he said yes. He then invited me to his studio and we made the song‚” he said.

In the upbeat rap jam‚ Dee raps about his life and journey from Rustenburg to Jo’burg while Kwesta details his ‘come up’ story.

Dee said he is definitely here to stay and the people should just look out for more music from him.