Cindy Malaza battles paralysis to achieve dream of being a pilot 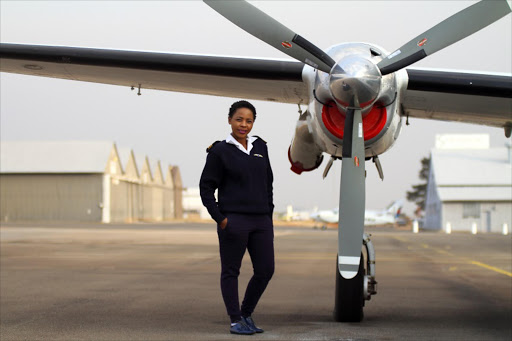 Every girl grows up aspiring to be great. This was in the mind of Cindy Malaza to become a pilot as she overcame paralysis to reach the skies.

Malaza, born and bred in Ermelo, a small town in Mpumalanga, said she set her mind to achieve her dream.

She went as far as studying chemical engineering to save up to afford flight school.

"I have always wanted to be a pilot and I knew I would not let anything stand in my way of becoming one," she said.

Malaza said that during her time at Ligron Technical High School, she told her mother that she wanted to fly.

She said that when she was about to finish high school, she was diagnosed with Guillain-Barré Syndrome, a paralysis condition. She was paralysed.

But, according to her, the condition, though hard, was a blessing in disguise even though it didn't seem so at the time.

"Going through that and seeing the business woman and pilot that I am today reminds me that everything is possible. From the time I had it, I never gave up, I kept planning my future as though I knew I would walk again."

Malaza said even when she was ill, she still shared her dreams of becoming a pilot with her grandfather.

"I remember having a conversation with my grandfather about how one day I was going to be a pilot and him, with great sadness in his face, not knowing how he would tell me that was impossible seeing my current situation," she said.

As time went by, Malaza was able to walk again.

"During that time, my mother could only afford to take me to a 'normal' university. She sent me to university to study chemical engineering and advised that I can graduate, get a job and then save up money for flight school," said Malaza.

She graduated from the University of Johannesburg in 2010 and worked for a chemical engineering firm for two years.

She enrolled at 43 Air School in Port Alfred in the Eastern Cape. "I got a sponsorship and left my job. A month and a half later I was expelled from the flight school and lost my sponsorship because I still could not fly."

But, she did not give up.

"I fought for a good six months on how unfairly I was dismissed. Flying was a skill that needed to be developed, unlike singing talent. Eventually I was accepted into another flight school," said Malaza.

"I found another sponsor but they only covered a part of the fee, far from enough to get me through."

Malaza said she had to find a way to make more money.

"It was either I work part-time as an engineer and do flight school part-time. I knew I didn't want to continue in the engineering field. So I had to think of my other interests and talents that could bring in money because I was not going to give up on my dream after I had come so far," she said.

The 32-year-old said she dug into her other passion, interior design and manufacturing of furniture and opened a business called Timeless Opulence. "I started with close to nothing, no more than R1000 to growing this into a real company."

With her business growing, she enrolled at the Eagle Flight Academy where she obtained her commercial pilot's licence.

"I have a corner outside where I sit back, look at the sky and speak to my God, where I look into infinity and realise how limitless I am."