His stock is rising: DJ Warras 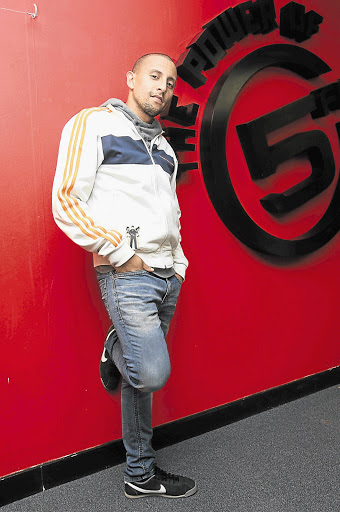 In fact, he jokes that he wants to produce a "soccer team" and already has his third child on the way.

5FM'S latest acquisition, Warrick Stock, aka DJ Warras the Shadylurker, is climbing the success ladder rapidly. But he reckons his biggest success yet is raising his two boys, Ethan (3) and Kiyaan (4).

"If only life were cheap," he jokes.

The ideal place he would like to have them raised is on the family farm in Vryheid, KwaZulu-Natal, where he grew up with his grandparents.

"It was proper rural. It has really grounded me as a person. My gran was like the chief over there. She had a borehole installed and taught the community how to cultivate vegetables and grow their herd. She went there when there was nothing and soon a whole community rose up.

"This is where I learnt to speak isiZulu, a language that I love."

He has come a long way since joining YFM six years ago, to presenting, a rocking club DJ as well as an MC who never holds back his sometimes controversial opinions.

Stock speaks his mind when we ask about his parents. "My mom is great. She had to work in Jozi while I stayed with my grandparents. My dad was an a**hole I never knew. I have eight (half-) brothers and sisters who I don't really know. I'm the only child from my mom's side."

With all his achievements, he reckons he is still only a farm boy who once wanted to be a stockbroker.

He says that although he may act stupid and silly on air, he wasn't stupid at school and credits his grandfather for his "intelligence".

"I passed matric with three As and two Bs. My granddad insisted we educate ourselves, and by the age of four I could read a newspaper article. He was a teacher for 40 years and always said no one can take away your education or your talent."

The film Wall Street convinced him to follow stockbroking, which he might just do one day when he's older and grey. "I'm an avid trader right now. I watch anything related to stock markets. I'm obsessed with it. I will get into it proper one day."

Hopefully then, he'll drop the name "Warras". He laughs.

"That name is like so hard and ratchet. When I went to YFM, the producers insisted on the name, and I was like. I'm not that guy from Eldos (Eldorado Park). But the name has kinda stuck and it's grown on me," says Stock.

But not being a nine-to-five person, he ventured into radio and producing and creating killer house beats. He also co-presents Live Amp with Pearl Thusi on SABC1 on Friday evenings. And he certainly has the gift of the gab.

Having recently joined 5FM, on The 5th Element show from 7pm to 10pm weekdays, he says getting into radio was really a coincidence.

"I was studying at RAU, now UJ, reading for a BCom in investment management. Needless to say, I didn't finish, cos the girls liked me too much. I used to drink with this guy at the pub there. He moved on to YFM and called me when he became programmes manager. He said they were looking for a coloured guy who speaks vernac. They needed someone urgently to replace Trevor Noah. And I can be any guy."

But before radio, he was working at shops manning the perfume counter as well as doing call centre jobs. And he did a McDonald's ad, which helped to pay his varsity fees.

Stock, who was hosting the 6pm to 9pm show on YFM, left the station this year after he and station chief executive Kanthan Pillay had a fallout.

"I turned down the offer to renew my contract and they prematurely took me off my show. I grew up listening to guys like Fresh and Gareth Cliff and Roger Goode and now I'm working at the station where some of them still are. But. my product is unique. I ain't trying to be like anyone else."

"And working with Tumi Voster, who was my sidekick at YFM, is even better. We gel and know how to make the listeners enjoy the show by having fun and acting silly."

His plans this year include his own compilation.

"Being a DJ, from playing in Alex to even bigger venues and events, has really grown my brand. If you play music, you must be able to create music, and I'm loving it."

He also hopes to be in a film one day. "Even if it's the Mzansi version of Wall Street," he jokes.