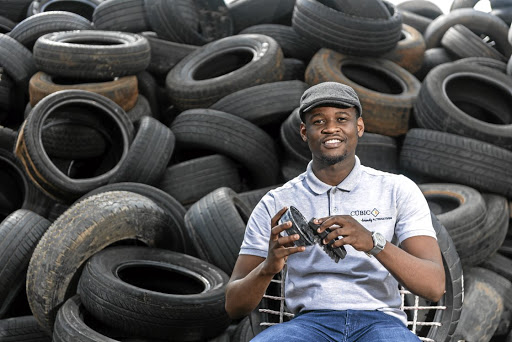 Social entrepreneur Mzokhona Maxase, the co-founder and co-owner of Cubic 8.

Motor vehicle tyres have been infamous as tools used to "necklace" apartheid state informers. Burning tyres are also used to block the roads during protests.

But social entrepreneur Mzokhona Maxase and his business partner Tshepo Sithole, who founded a small business called Cubic 38, have found an alternative use for the tyres that are hazardous to the environment.

They were both students at Tshwane University of Technology (TUT) in Pretoria two years ago when they established Cubic 38, which manufactures car tyres and shoe polish from a product extracted from recycled tyres and processed rubber called char.

"It was by chance that we met the owners of a tyre-recycling plant in Pretoria West. They didn't know what to do with the char after extracting oil and steel wire from the recycled tyres," says Maxase. "Even though we are not science students, we wanted to enter and play in the green economy space."

Maxase, 24, from Hluhluwe in northern KwaZulu-Natal, is a logistics BTech graduate and Sithole, 25, from Wattville in Ekurhuleni, is doing his last year of a diploma in sports management.

Maxase says they wanted to use the char to create high quality and affordable products for daily use.

There are a number of plants extracting oil and steel from tyres in the country and according to Maxase, they are all stuck with the waste char.

"The guys at the Pretoria West plant gave us 500g to test at the university laboratory. We didn't have a clue of its properties and what it was. We had one idea in mind - that in our rural villages candle wax is turned into polish by melting it and adding paraffin.

"With the help of one of the chemistry professors, we did our research. He guided us as we were working from a small garage at the TUT residence.

"Why not car tyre and shoe polish, we asked ourselves. We developed this idea to return the char tyre waste back to tyres in the form of polish.

"We now jokingly call it a product from the tyre for the tyres."

Maxase says though the polish is at the prototype stage, they have found a market after tests were conducted at the university's TIA technology station in chemicals in Ga-Rankuwa.

He says they aim to go into full-scale production in September.