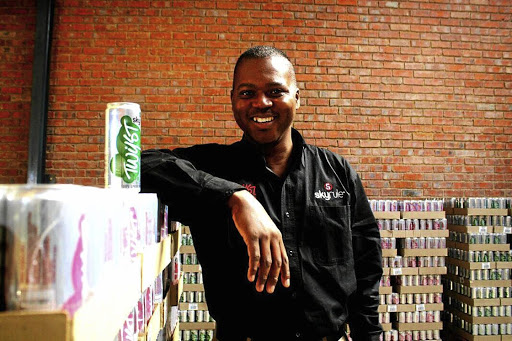 In his teen years he sold ice cream to his peers to make a few bucks and later graduated to selling live chickens at a street corner in Temong Section, Tembisa, on the East Rand.

Today Sammy Mhaule is the gratified owner and managing director of the ever-growing Skyrule Drinks, a company producing sparkling fruit juice drinks with a twist.

"I don't get tired of telling the story of how it all started. I was passing a drinks shelf in a supermarket when it crossed my mind that it would be marvelous if there was a 100% sparkling juice with two flavours in one.

"I knew then I was onto something. I then spent 18 months researching the blend Skyrule Drinks," says Mhaule.

Conceptualised by Mhaule in 2009, the entity started producing the juice in 2010, in time for the Fifa soccer World Cup in South Africa.

"We learnt the hard way because we didn't make any returns for our investment.

"We hoped to cash in on the World Cup, in fact we lost money because the football event has its international official suppliers and sponsors.

Malinga tells it all with exotic flowers

"It was not by choice that I decided to sell ice cream and live chicken. I come from a disadvantaged background. One of my parents was not working while raising the four of us.

"It was the situation at home that ignited my entrepreneurial instincts. Since the ice cream was a small income-generating business I graduated to live chicken after returning from working as marketer for Quantum in the UK.

"And being jobless, it was a roaring business, especially on weekends."

Mhaule, 39, says he used to be stuck at one of the busiest corners in Tembisa and boys in the neighbourhood would always mock him for smelling like chicken. Little did they realise they were making him stronger, he remembers.

The engineering motor mechanic college graduate's first job was at a BMW dealership in Kempton Park. With his savings he started the Skyrule Drinks entity, which now competes for space on shelves at Pick n Pay Hyper stores, Checkers, OK Foods, Lowveld Spar supermarkets and Tsogo Sun hotels. "I had to be innovative in this space.

"I didn't want to introduce just another sparkling drink into the market. That's the reason why our sparkling juices come with a "Twyst". For instance, the grape flavour comes with a twist of blueberry.

"It all started when Tsogo Sun opened their doors for us to supply the beverage to their hotels. First the juice came in a bottle form. Later we graduated to mass production cans we purchase from Bevcan.

StokFella the brainchild of Moloi

"I had no starting capital and no financiers. I invested and re-invested what I was earning. I had to sell my house and car to buy a bakkie for deliveries."

Mhaule, a married father of two, says the beverage industry and consumers in general are a fickle lot. It's difficult to sway the public to his product if they swear by an established cola blend and brand.

"Last month we were barred from selling inside the venue at the DStv Food and Music Festival in Kyalami. The big guns had bought and taken over all the stalls to prevent us from coming into the venue.

"You know what we did? We set up our stalls and tables outside the festival. We gave away the product to the thousands of motorists driving to the festival.

"We were in your face, they know us now."

Based in the Tembisa industrial area, to make employees walk instead of paying for transport, Skyrule Drinks has a staff compliment of eight full-time and 25 part-time workers.