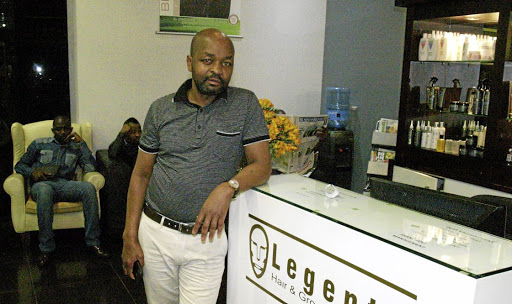 Sizwe Sithole at his upmarket Legents Hair & Grooming Lounge business in Sandton. He has learnt to be hands-on in business management.

Entrepreneur Sizwe Sithole counts Sandton City, north of Jozi, as his happy hunting ground for the success of his hair and beauty enterprise in the decade he has been in business.

Legents Hair & Grooming Lounge celebrates its 10th-year anniversary this year, and managing director and founder Sithole is buoyant. The place is a beehive of activity as clients, among them familiar faces and celebrities, come for some skin treatment, hair grooming and styling.

Sandton is referred to as South Africa's capital city of finance, boasting the who's who of big logistical and financial services companies such as Discovery Home - a new, massive building also housing the newly launched Discovery Bank.

Other notable local and international big names which have found a home in Sandton City include UK-based banks HBSC and Standard Chartered, as well as Citi Bank.

Sithole, 46, says Sandton is where the money is, adding that many of his business clients can afford the lifestyle associated with those in the upper level of the economy. Does this mean he's loaded, judging by the profiles of some of his clients?

"It's all about financial discipline and investing in the future. But of course, there is some bit of fortune to be made here. We define our market according to people's life style measurement," he said.

"These start from the middle-class up to those on the upper-end of the top-earning bracket. The good thing about these people is that they have been regulars for years."

"I would personally work on his (Walter) hair because it needed someone like me who is experienced in grooming that sort of grey hair.

It was always a pleasure to have mkhulu as a client," Sithole said, while pointing to a framed picture of himself with the old man on the wall.

His long way to Sandton began in the late 1990s while working for the then famous Alex Hair Studio in Joburg's Smal Street before moving to work for former goalkeeper and SABC sports commentator Deshi Bhaktawer's Hair Studio in Sandton between 1995 and 2007.

In 2008 Sithole launched Legents Hair & Grooming Lounge and, as they say, the rest is history. He credits Bhaktawer with instilling a good sense of business management in him.

"He is a very strict and a hands-on manager who not only ensures his employees are professionals but are also empowered. In fact, he taught me all about managing a business and to be on my own."

Sithole himself is a qualified hair dresser who also did a short course in skin treatment. He says success for him means being happy and creating jobs for others. His business employs 18 people - ranging from hair stylists to skin treatment experts.

Among his employees are 10 women.

Changing the face of townships, one mural at a time

Husband-and-wife team is putting up adverts that benefit kasi residents.
Business
3 years ago
Next Article