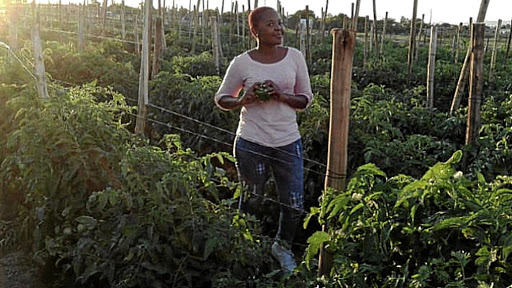 Social entrepreneur and bio-diesel producer Mosa Mapheto is becoming a dominant force in youth farming and oil recycling in her home village.

In 2016 Mapheto founded a youth-led vegetable farming programme called My Tomorrow Academy, which now provides full- and part-time employment for 13 young people in her village of Ga-Mphahlele in Limpopo.

Mapheto, 26, said she realised she had to start her own farming business towards the end of her internship at the University of Pretoria in 2016 because she didn't want an nine-to-five job.

"Growing up in Gauteng, when I went home for the holidays I noticed how my childhood peers were struggling for jobs and I was concerned," said Mapheto.

"For most of them it was not because they were academically challenged, they dropped out of school due to socioeconomic factors such as poverty and [coming from] child-headed homes.

"I took it upon myself to start a youth-led farm to curb youth unemployment and malnutrition."

Mapheto said they currently produce vegetable crops in a backyard garden at her home, from where they supply their produce to the local Boxer and Spar supermarkets and the local community.

Google’s cloud-computing service went down briefly‚ disrupting websites and apps hosted on the platform such as Snapchat‚ Discord and Spotify on ...
Business
3 years ago

Now that she has acquired four hectares of land she inherited from her grandfather in Bolopa village in Ga-Mphahlele, she plans to set up a bigger farm by the end of the year.

"My ultimate goal is to have youth-led farms across the country, and later venture into agro-processing," she said.

But getting the newly acquired land ready for farming has been slow because of a lack of funding in getting a borehole drilled, a water reservoir, electricity installed and a fence erected.

Mapheto, who is the 2017 Regional Business Plan competition winner, said she started bio-diesel production early this year after realising there were companies which buy used oil from restaurants, bleach it and resell it.

She said with the mentorship she received from Seed Engine Incubator, in partnership with Shell Petroleum, she underwent training to produce quality bio-diesel from used vegetable oil and to identify potential markets to sell it.

"Bio-diesel can be used as an alternative to diesel.

"It is more affordable and lasts longer compared to diesel, giving engines a longer lifespan, and is friendly to the environment," she said.

"I don't have an academic background in agriculture or production of diesel but I learn everyday from my mentors, my community and from fellow entrepreneurs," she said.

Afro Voice loses millions as its clients pull out.
News
3 years ago
Next Article