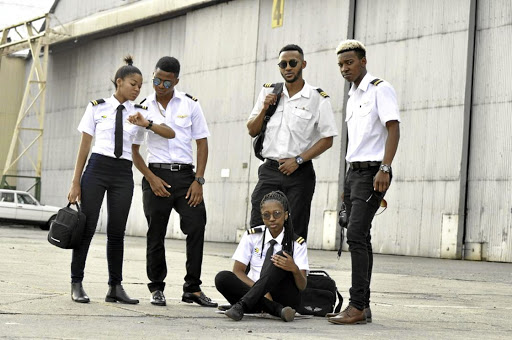 A group of young black South Africans are on a mission to change the way the local aviation industry operates.

The Young African Aviators organisation, comprising fully qualified aviators all under the age of 25, is of the opinion that careers in this "niche" industry are not only reserved for white males.

Among their goals is to raise funds to house a 100% fully black-owned charter company that will create job opportunities for struggling youth in this field.

"Many individuals are not aware of the aviation industry in South Africa. With our team of aviators [pilots, aeronautical engineers, flight attendants, air traffic controllers, etc], we reach out to schools, seminars and disadvantaged rural areas to brief and educate young and old of the various sectors in aviation," says Seakhoa.

He was exposed to the industry by his older sister who was a flight attendant.

"I wanted to become a civil engineer because my family are all engineers and architects, but my mother is the one who took me to the Waterkloof airshow. I was blown away by what I saw," he says.

Studying towards becoming a pilot is rather costly, but Seakhoa says he was one of the lucky few who received sponsorship from Teta (The Transport Education and Transport Authority).

"Having attended a private school, St Andrews in the Free State, my dad who's a politician didn't understand my choice of career. But he accepted that I had found something different. But it's hard being a qualified commercial pilot as well as a qualified instructor pilot and being black and unknown.

"If you are not connected or of a certain pigment, it's so much harder finding employment, hence the idea for this organisation.

"The SA Civil Aviation Authority has come on board to assist in the dream. They sponsor the plane which we fly to rural areas where we speak to kids, and give them the experience of being on a plane."

He is especially passionate about uplifting and grooming young females who aspire to fly, and speaks highly of his colleagues, Mosena and Mafoko.

"Then I saw a black man doing it in this film. I thought I can become a black female pilot. I came across an article on Asnath Mahapa, SA's first black female pilot, and that catapulted my need to go into this field."

Originally from Polokwane in Limpopo, Mahapa passed her private pilot's licence at the Johannesburg School of Flying at Rand Airport and now has her commercial flying licence.

Mosena says: "Women are not what they were 40 years ago. We want to be free and do anything men can do. What p****s me off is when people ask me, 'so you want to be an air hostess?' Like the doctor who asked me when I went for my aviation medicals. He was shocked that this young girl had a vision to fly her own airplane."

Mafoko, 19, knew at the age of six that she would become a pilot. "I travelled by plane between my mom and dad. I saw a pilot and was mesmerised. Flying gives me a sense of freedom like nothing I've ever experienced before.

"Before my dad passed away in 2015, he gave me his blessings to follow my dreams."

The second-year student and qualified private licence pilot says it's become more than being a woman flying an aircraft for her. She hopes to help change legislation pertaining to women.

"I learnt that women are unpaid when they take maternity leave. Most females in aviation neglect to breastfeed so they can be at work sooner.

"Women are not allowed to breastfeed in the cockpit.

"A lot has to change and we are confident that it will."

To the young, it's all in your hands now

Friday's edition of the Sowetan was put together by staff members under 35 years of age.
Opinion
3 years ago
Next Article