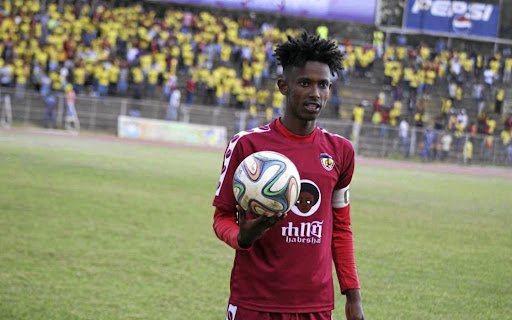 Abubeker Nasser could be Ethiopia's man to watch in the return leg of the 2022 Fifa World Cup qualifier Bafana Bafana will play against the Ethiopians at the FNB Stadium on Tuesday.
Image: Kidus Yoftahe

Bafana Bafana may have beaten Ethiopia in their first meeting with the East Africans at the Bahir Dar International Stadium on Saturday afternoon, but the task at hand is far from completed.

Coach Hugo Broos' charges emerged with a comfortable 3-1 win away from home, but the Ethiopians still pose a formidable threat and the South Africans need to tread very carefully as the visitors have several players who could make things very difficult at FNB Stadium on Tuesday night.

The statistics of the first  match between the two sides showed the Ethiopians almost had 70% of ball possession and delivered five shots on target — the same number of shots as Bafana — and it was thanks to SA goalkeeper Ronwen Williams' heroics that only one goal by Ethiopia captain Gateneh Kebede was conceded.

Bafana might be playing at home on Tuesday but they need to exercise extra caution, especially around three players who could prove to be a handful.

The three Ethiopia players Bafana should be wary of:

The attacking midfielder was the only change Ethiopia coach Wubetu Abate made in his team from the two previous qualifiers against Zimbabwe and Ghana. Dagnachew was very unlucky not to score in both halves where he tested Williams with some good shots taken from outside the area.

Dagnachew also linked up very well with strikers Kebede and Abubeker, and was the reason why Thabiso Kutumela conceded a free-kick against him just outside the area to give his captain a chance to cancel Bafana’s first half lead early after the restart.

Teboho Mokoena, Ethan Brooks and Mothobi Mvala must make sure Dagnachew sees very little of the ball, especially in the dangerous area, as he orchestrated the Ethiopia  attacks in the first match.

The Ethiopian skipper worked his socks off in the first leg, leading by example in getting his team to move to dangerous areas. He was not afraid to feed the oncoming midfielders with good passes when he had no space to take a shot at goal.

Committing free-kicks near the area could be very dangerous as Kebede showed with the  wonderful set-piece he scored at the Bahir Dar stadium. Kebede likes to score for Ethiopia against Bafana as his strike on Saturday was the second in two successive matches. Bafana must make sure he doesn’t get the ball near the area. They must also be wary of the intelligent one-twos he makes with his teammates when he’s been backed into a tight corner.

Nasser showed his class and proved why he’s the most talked about player in Ethiopia at the moment after scoring 29 goals in 23 league matches for Coffee SC in his domestic league last season. Nasser was denied by Williams twice in the first half after finding himself  one-on-one with the Bafana skipper.

He could have given Ethiopia a healthy lead going to half-time and will be a man to mark at the FNB Stadium as the Ethiopians will pin their hopes on him getting them back into contention to qualify for Qatar. The nippy striker is good coming on the left flank but showed his versatility on Saturday by getting on the end of some crucial passes to test Williams.