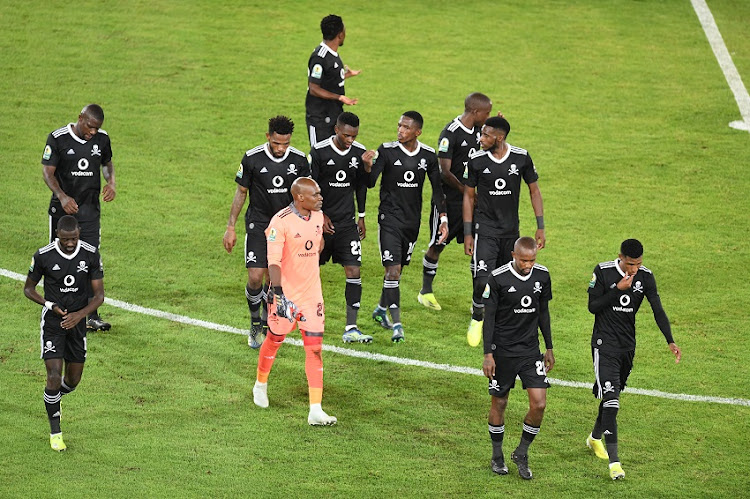 Orlando Pirates pulled off a crucial 2-1 win over Enyimba of Nigeria during their Caf Confederation Cup, group stage clash at a wet Orlando Stadium on Wednesday.

With this win, the Buccaneers have moved to the top of Group A with four points from two matches and they will be looking to solidify their position with another win in their next match against Al Ahly Benghazi of Libya next month.

Pirates secured this victory with an injury time header striker by striker Tshegofatso Mabasa who made up for an earlier mistake of missing from the penalty spot.

Pirates took the lead after 26 minutes and in style when Namibian international Deon Hotto sneaked the ball into the net with a clever back heel after Enyimba defenders failed to clear the danger.

The opening goal was a timely reward for the Buccaneers as they have been knocking on the Enyimba door with the likes of Linda Mntambo, Vincent Pule, Hotto and Fortune Makaringe.

A few minutes later, Enyimba reacted by breaching the Pirates with a quick counter attack that ended with Iwula Emmanuel in the box but was denied by alert Siyabonga Mpontshane between the poles.

On the stroke of half time, Enyimba equalised from the penalty spot as their skipper Oladapo Tunde showed nerves of steel to sent Mpontshane the wrong way.

For the penalty, Mpontshane hesitated to move out of his line and as a result he could only bring down advancing Emmanuel in the box and referee Ngwa Blaise Yuven pointed to the spot.

Later, Enyimba goalkeeper John Noble had to stretch at full length to deny Pule who unleashed a powerful pile driver from the edge of the box after he received a pass Ben Motshwari after 55 minutes.

Pirates continued to press forward looking to increase their lead and around the half hour mark they threatened Noble through efforts of Mabasa and Innocent Maela in quick succession.

Pirates missed out on an opportunity retake the lead after 76 minutes when Mabasa slipped put his penalty kick over the crossbar after Gabadinho Mhango was brought down in the box by Ogbonnaya Nelson.

But Pirates had the last laugh as Mabasa headed home in the dying minutes for this crucial victory that gets their campaign back on track.