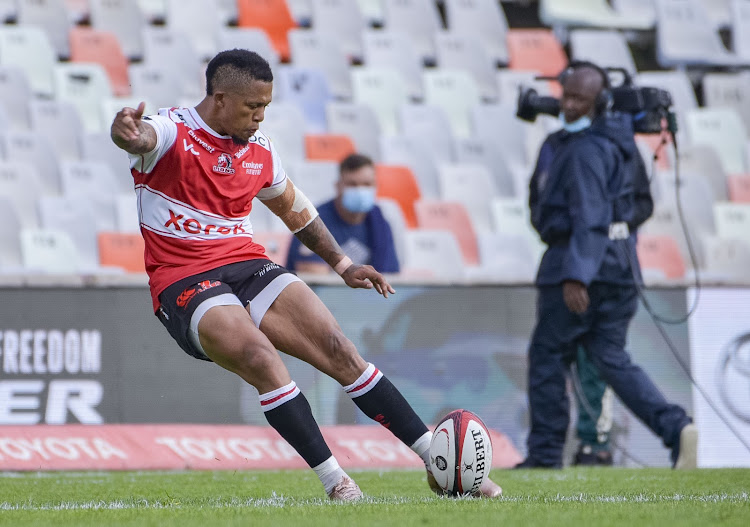 Captain Elton Jantjies says he has seen an upward curve in the team's performance after their Carling Currie Cup win over the Cheetah in Bloemfontein on December 12 2020. .
Image: Frikkie Kapp/Gallo Images

Lions talisman Elton Jantjies may have played his last game for the franchise.

He has been given the green light to join French Top 14 side Pau as a medical joker. His contract with the Lions expires in June and unless he concludes a new deal‚ he would have played his last game for the team.

“Upon request from Elton Jantjies and in conjunction with SA Rugby‚ Lions Rugby Company has released the player for an opportunity as medical joker with French club Pau in preparation for the British & Irish Lions‚” the franchise said in a statement.

With the domestic season having ground to a halt‚ it was felt that Jantjies‚ whose last Test was against Canada in Kobe during the 2019 Rugby World Cup‚ was better served to play in Europe. SA Rugby gave their blessing for the move as Jantjies will get game time in one of the sport's most unforgiving leagues.

With Handre Pollard still recovering from long-term injury‚ Jantjies will almost certainly be in the Boks mix for the much anticipated series against the British & Irish Lions. Pollard ruptured an anterior cruciate ligament while on duty for Montpellier in September last year.

Jantjies will be joining struggling team in the Pyrenees as a medical joker‚ effectively a player that is added to a squad as an injury replacement.

Pau have had it tough winning just six of their Top 14 games this season. They are second last on the points table‚ well above Agen.

The 30-year-old Jantjies' only other experience playing abroad was with the Japanese outfit‚ NTT Shining Arcs‚ he represented between 2014 and 2018.