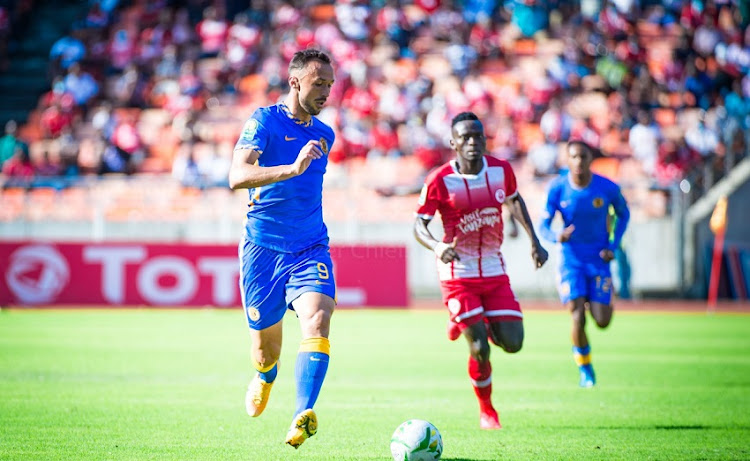 Kaizer Chiefs go through to the semi-finals of Africa’s prestigious competition despite their 3-0 defeat to Simba SC at the Benjamin Mkapa Stadium in Tanzania on Saturday.
Image: TWITTER/KAIZER CHIEFS

Kaizer Chiefs continued with their unbelievable journey in the Caf Champions League when they qualified for the semi-finals of Africa’s prestigious competition despite their 3-0 defeat to Simba SC at the Benjamin Mkapa Stadium in Tanzania on Saturday.

Amakhosi won the match 4-3 on aggregate after surviving an over 100-minute relentless attack from the home side which was backed by 10 000 vociferous fans.

Simba looked on course to reverse the 4-0 first leg deficit with their skipper John Bocco’s two goals in either half (24th and 56th minutes). But Chiefs survived Simba’s domination despite conceding Clatous Chama’s goal four minutes before time.

Gavin Hunt’s team which was never given a chance to go this far in this competition when they started with an unconvincing Eric Mathoho’s solitary goal win against PWD Bamenda of Cameroon in the preliminary round back in November, will now face the winners of a quarterfinal tie between Moroccan giants Wydad Athletic and Algerian side MC Alger who were playing late yesterday in Morocco.

A place in the final on July 17 at the Stade Mohammed V Stadium in Morocco cannot be ruled out for Amakhosi as they will have an advantage of playing the second leg (25-26 June) of the semis at home after the first leg (18-19 June) in Algeria or Morocco.

Chiefs will, however, not wish to meet Wydad for the second time in the this competition after they lost 4-0 away to them before winning 1-0 at home to finish second behind the Moroccans in Group C.

The match started on a blistering pace with Simba looking to repeat what they did to Mufulira Wanderers of Zambai in the first round of the 1979 edition of this competition. In that match Simba lost 4-0 at home before producing one of the extra-ordinary come backs by beating Wanderers 5-0 away to win the match 5-4 o aggregate.

Chiefs survived as many tense moments in yesterday’s match and should thank their young goalkeeper Bruce Bvuma for a one-on-one save he pulled facing Bocco, a minute after the attacker had given Simba an early lead.

Hunt’s team was also lucky to have a brave referee in Pacifique Ndabihawenimana who ignored calls for a penalty in the first stanza when defender Eric Mathoho handled. The referee was also correct in cautioning the former Orlando Pirates player Bernard Morrison for a deliberate dive inside the box on the stroke of the added minutes in the first half.

Unlike in the first leg where Chiefs looked for goals, they were happy to just avoid conceding as many goals in yesterday’s tie where they only wanted to manage the game and catch their opponents on a break.