Irvin Khoza defends PSL legal actions as fair and above board 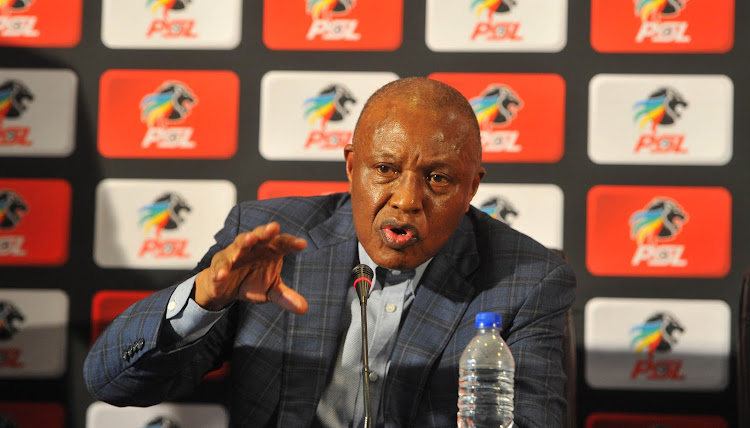 Premier Soccer League (PSL) chairman Irvin Khoza has vehemently defended the legal actions of the organization‚ especially pertaining to clubs‚ as above board‚ fair and lawful.

Khoza said that PSL prosecutor Nande Becker is fully independent when dealing with such cases.

There have been suspicions raised and aspersions cast of interference from the league. Khoza‚ however‚ said in a marathon media briefing at the PSL’s offices in Parktown‚ Johannnesburg on Tuesday that there is separation of powers between Becker and the league’s executive committee (Exco).

“What is important as the Exco of the league is the fairness‚ speedy resolutions and the lawfulness of any situation we deal with‚” Khoza said.

On the matter of timing of outcomes the chairman said that some of cases have taken time because of postponements. He said no club is targeted.

“Every club has got a right to be given the opportunity to ask for a postponement and all postponements are discussed and agreed on with the prosecutor‚” Khoza said.

“No CEO or any executive gets involved in those issues of postponements but sometimes in the media it is [portrayed] as if there is some influence of some sort.

“There is a case about one club and there is a perception that it is about the end of the season for another team to get an advantage and that is nonsense.

“What advantage because the prosecutor must explain where the process is‚ why there are delays and why issues are not treated the same as others?”

Mamelodi Sundowns coach Pitso Mosimane recently questioned the timing of a case Downs were found guilty of last week‚ and will be sentenced on this Friday‚ surrounding the fielding of ineligible player Wayne Arendse in a 1-1 league against Bidvest Wits this season.

Khoza added that the league’s processes are dictated to by the NSL (National Soccer League‚ the PSL’s mother body) Handbook. He said any perceptions there might be that the league are sluggish and incompetent in legal actions are misplaced.

“I think it is very important that we clarify what separates the Exco and the judiciary and that is why we said for the first time‚ let’s have the prosecutor [Becker] in a press conference‚” the chairman said.

“Football is very interesting because it is regulated and you can never say it is my feelings as the chairman or those of the [acting] CEO [Mato Madlala].

“But‚ for some people it appears as if we are sluggish and incompetent‚ but a lot of other issues that cause delays are due to postponements‚ some clubs get legal minds and they want further particulars‚ and you must give them those particulars.

“But‚ there is a problem because a lot of people get killed [figuratively]‚ slandered if the negative perceptions persist. We try to apply a lot of fairness and lawfulness in what we do because of when the matter is taken for review.

“And that is why in the matter of Ajax Cape Town [known as Ndorogate] is a case in point. We indicated by arbitrations on three occasions‚ two or three court sittings‚ and we were vindicated in this matter that we were right as a league in challenging the decision of the Dispute Resolution Chamber [DRC]‚ which is one of our judiciary arms.

“I also want to indicate the process that whenever a match is played‚ the referees report and the match commissioner’s report are sent to the referees’ coordinator.

“The first thing that is done after receiving the reports is to send it to the clubs that were playing. From there it is dispatched to the football department of the league to capture things like red and yellow cards.”