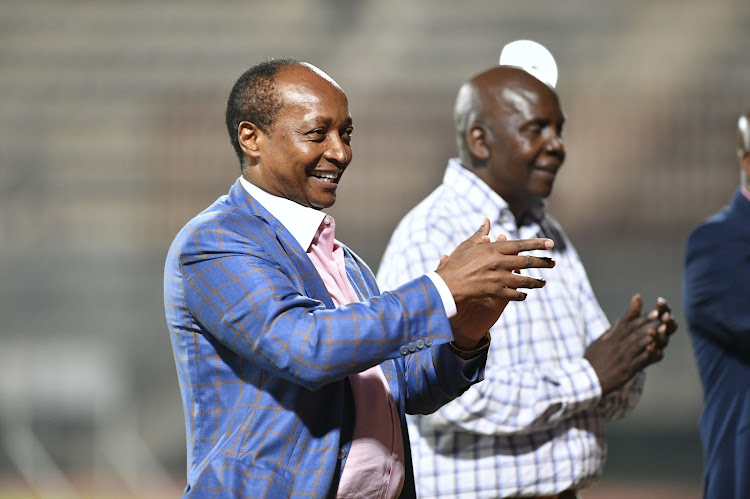 It’s not often that a visiting coach gets praise from Patrice Motsepe but that is exactly what happened to Kaitano Tembo despite his SuperSport United derailing Mamelodi Sundowns’s title charge on Wednesday.

SuperSport put up a spirited performance to defeat title-chasing Sundowns with a 2-0 Absa Premiership win at Loftus that could come back to haunt coach Pitso Mosimane in the race for the league championship.

The Sundowns’ owner-chairman normally walks past the area where coaches usually conduct their post-match press briefings after matches without uttering a word irrespective of the result of a game.

But on Wednesday while Kaitano was in the middle of an interview with reporters after the match‚ Motsepe‚ who had emerged from the Sundowns dressing room‚ took time to interrupt the press briefing and personally congratulated the SuperSport coach on the win.

“Coach…coach..coach…Tembo…Tembo good job hey‚ good job. I’m very proud of you‚” Motsepe said to Kaitano while the cameras and recorders were rolling.

“Ja it means a lot‚” said the 48-year-old coach when asked what it meant to receive a personal congratulatory message from Motsepe.

After the comprehensive 5-0 demolition of Al Ahly in the first leg of the Caf Champions League quarter-final on Saturday‚ humble Mamelodi Sundonwns ...
Sport
3 years ago

“It means a lot because it shows that he is someone who appreciates‚” added Tembo after the win that lifted SuperSport to fourth on the log and seven points behind leaders Orlando Pirates with a game in hand.

“He (Motsepe) could have been upset (over the loss) because his team is fighting for the league but for him to take his time you know to congratulate us I think it is something special.”

Goals in each half from Grant Kekana and Zambian hitman Ghampani Lungu did the business for Tembo as Sundowns struggled‚ with their heavy schedule appearing to be catching up with them.

The defeat left Sundowns six points behind Pirates although they have played two matches less.

So flat were Sundowns at times that Tembo conceded they never really felt under pressure against the Brazilians.

“I thought the only time where I felt we were really under pressure was through our own mistakes where we gave the ball away in positions where we could be punished‚” said Tembo‚ who managed to mastermind a SuperSport victory over cross-town rivals Sundowns for the first time since March 10 2013.

Will it be Pitso or Benni after Baxter?

“I think credit should go to the players because I think we have a very good squad.

"I was confident I have got a team which can be able to match Sundowns toe to toe. We did that. The players rose to the occasion.”

SuperSport had a good start to the season but went through a mid-season slump.

They have since managed to pull themselves back into title contention.

With a game in hand over leaders Pirates and just seven points behind‚ Tembo believes the win kept them afloat in the race for the title.

“This (win) gives us an opportunity to keep fighting (for the league title)‚” said Tembo.

SuperSport are away to AmaZulu in their next match on Wednesday April 24 at the King Zwelithini Stadium in Umlazi.