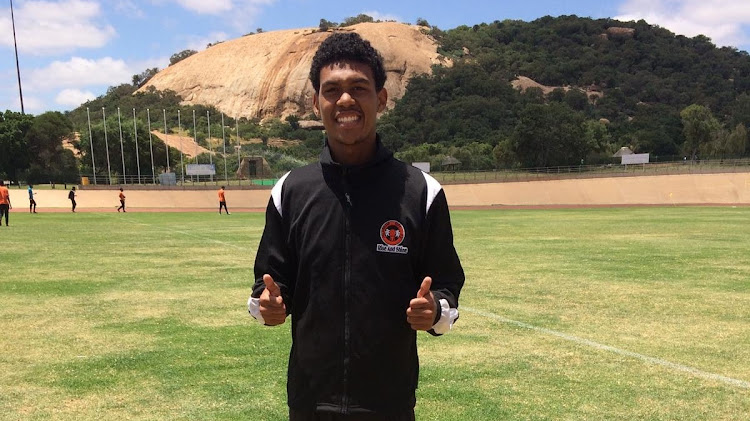 Following an excruciating five-week trial held by Shield across the country‚ the 21 year old Cape Town-born player produced a stellar performance to woo the attention of scouters in the tournament.

Khan said he is grateful for the life-changing opportunity that has been afforded to him after growing up in the gang-ridden community of Mitchell Plain where there are no recreational activities to keep kids away from violence and drugs.

"Look I was clubless back at home [in Cape Town] doing nothing and I saw a Shield competition on Facebook and all I did was to enter and the rest is history‚" he told SowetanLIVE.

"We had about 500 players who came in for the trials and they only wanted five players‚ it wasn’t easy.

"Most important for me...what inspired me and how I got this breakthrough was just passion for the game.

"I went to London through Shield and to go watch Chelsea playing up against West ham United and that's where I saw the home of the Blues.

"I got a call from Polokwane City and they said they needed a striker.

"I said I am keen on coming and that was it.

"I came here [Polokwane] for trials and later that week they said they are happy with me. I have only been here for two month now. "

Khan said he would use this opportunity to market himself and hope to secure a deal to play in the elite league.

"I'm just trying to get my name out there and want sign a PSL or MDC contract that's it.

The 21 year-old said he comes from the family of players.

"Look football runs through the family from my dad to my mother and grandfather they all played football‚" he said.

"I come out of the area where there's lot of success and potential but not a lot of young people have made it because of drugs and violence.

"Shield has given me an amazing (opportunity) and I am grateful for this experience‚" he added.

"I am going to coaching after playing football just to inspire other communities and I am so motivated by the likes of Benni McCarthy [Cape Town City coach]."

His coach Machete Moloto described Khan as a gifted striker with a promising future.

"He has potential and technically he is good‚" Moloto said.

"Age is still on his side and you could see when he plays that he understands his role. He scores even when we have not won the game."

Shield announced that they would cast the net wider this year and 25 coaches are expected to take part in the campaign‚ with the aim of imparting knowledge in the various communities across the country.