By mahlatse mphahlele AND Mahlatse Mphahlele 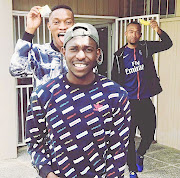 Recently signed Mamelodi Sundowns defender Grant Kekana has settled in nicely at Chloorkop thanks to some help from  close friend and former team-mate Aubrey Modiba.

Kekana and Modiba‚ who played together at SuperSport United for a number of years‚ have reunited at Sundowns where they will be looking to help their new employers defend their league title.

Sundowns boosted their squad during the off-season with the acquisitions of defenders Kekana‚ Divine Lunga from Golden Arrows‚ and Neo Maema and Sifiso Ngobeni from Bloemfontein Celtic.

Kekana said the familiar faces he's seen at Chloorkop since his arrival during pre-season training helped him to settle down at his new environment and to hit the ground running.

“It feels good‚ it’s always nice moving into a new environment with familiar faces. I think that has also helped me to gel with the boys‚” said Kekana‚ adding that his relationship with Modiba extends beyond football.

“My friendship with Modiba is good both inside and outside of football because there are a few community projects where we are partners. I think our relationship goes even beyond the football aspect.”

Maema is another new arrival at Sundowns and he is also settling well at the club.

“Settling in with the guys has not been difficult because the guys made it very easy for me‚" he said.

"There are a lot of guys that I made friends with like Mshishi (Themba Zwane) and Aubrey Modiba‚ just to mention a few. Lyle Lakay and Thapelo Morena (both former Bloemfontein Celtic players) are the guys that have shown me around.”

Lunga‚ who is following in the footsteps of  the numerous  talented Zimbabwean players  to have worn the jersey - there are players like  like Esrom Nyandoro‚ Cuthbert Malajila and Peter Ndlovu - is also settling in well.

“I am settling in well‚ the guys are treating me well and they have welcomed me here in a good way. Some of the players like to make jokes and I think that’s how I’m getting along because I am that person who likes to laugh.

“I don’t talk much but when the guys crack some jokes‚ I am going to laugh and talk with them.” Concluded Lunga.