Bafana labour to win against 10-man Eswatini at Cosafa Cup 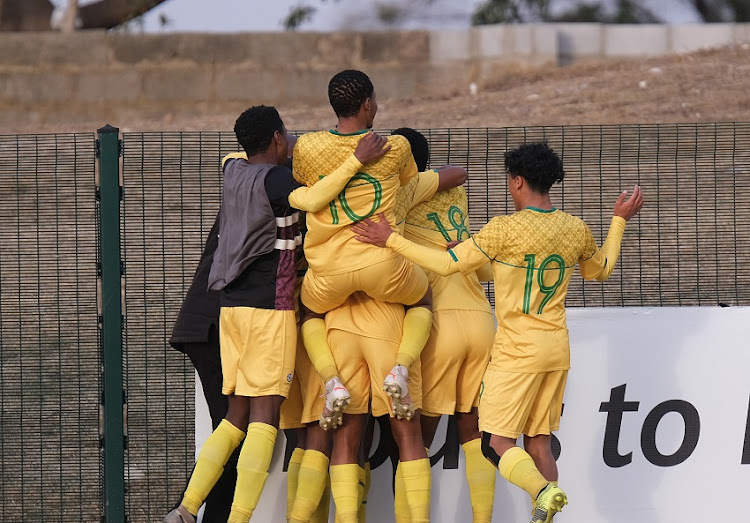 Again it was not pretty or convincing, but again the result counted as the developmental Bafana Bafana at the Cosafa Cup registered their second victory of Group A, labouring to a 1-0 win against 10-man Eswatini on Thursday.

Substitute Thabang Sibanyoni’s 60th-minute strike at a blustery Wolfson Stadium earned South Africa a second win, and a big step towards the knockout stages, after the strictly fringe Bafana B combination had begun with a 1-0 win against Botswana on Tuesday.

Again assistant coach Morena Ramoreboli took charge of SA on the bench, as Helman Mkhalele – coach for the tournament in the absence of new Bafana head coach Hugo Broos – has tested positive for Covid-19.

The South Africans were largely disjointed for large periods of the game against an Eswatini determined to put in a shift defensively and hold their bigger-name neighbours. But when it counted Bafana again found the penetration for the decisive goal.

The next game for the log leaders in the five-team Group A is against third-placed Lesotho on Tuesday.

In a subdued and sluggish first half SA battled to find cohesion at a characteristically wind-swept Wolfson.

Eswatini grinded hard to make life tough for the South Africans. But the possession that Bafana had in long periods could not be turned into a threat in the final third.

The closest anyone came to scoring was in the dying moments of the half, in the 43rd minute, from long-time Cosafa Cup star Badenhorst. After Rushine de Reuck fouled striker Sabelo Ndzinisa on the D, Badenhorst’s free-kick was truck cleanly but a metre over the bar.

After all their hard work to contain and frustrate SA, Eswatini suffered a blow when a minute into injury time Badenhorst – seemingly attempting to connect the ball – kicked the back of Sphelele Mkhulise’s leg.

SA would have wanted to apply pressure far more effectively with a man’s advantage after the break.

It was Eswatini, though, who forced the first save of the game moments in, as from Ndzinisa’s speculative chip right winger Fanele Mamba beat right-back Mashweu Mphahlele to burst through in the middle, captain Veli Mothwa making the stop.

Again, as had been the case with their winner against Botswana, SA’s goal came against the run of play.

And in another strange similarity, this time there was a role reversal. Against the Zebras Kagiso Malinga replaced Sibanyoni and scored soon after. On Thursday Sibanyoni came on for Malinga and scored.

Ethan Brooks’s cross was cleared by centreback Sihlangu Mkhwanazi only as far as Monnapule Saleng to burst back into the area and feed Sibanyoni, who beat keeper Ncamiso Dlamini.

Eswatini missed a golden chance to equalise in the dying seconds when Mamba turned a defender and chipped across the area, substitute Phiwayinkhosi Dlamini heading wide with Mothwa stranded and an open goal beckoning.